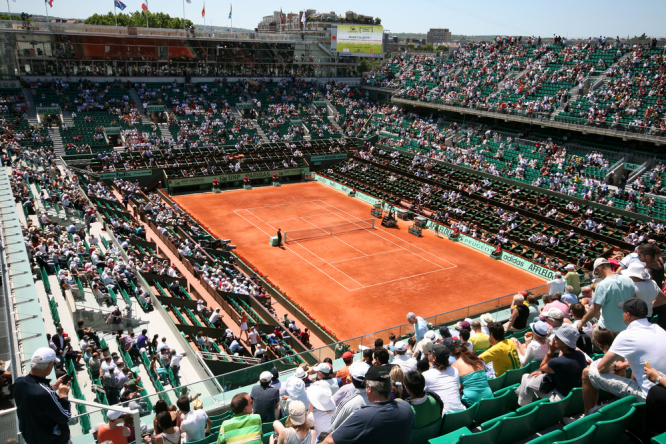 Fans watching a semi-final match at the French Open were given permission to stay after 23:00 by national authorities Pic: Olga Besnard / Shutterstock

Tennis fans at Roland Garros were allowed to continue watching Friday's semi-final after France’s 23:00 curfew while elsewhere in Paris party-goers were sent home by police for being out too late.

Attendees at the French open were watching a match between Rafael Nadal and Novak Djokovic that ran late into the evening, when an announcement was made “in agreement with national authorities” that they would be allowed to stay beyond 23:00.

This was greeted by cheers of “Merci Macron!” from the crowd.

The open air gathering in the square had been organised illegally online. Party-goers were dancing and not wearing masks or respecting social distancing rules.

A similar gathering happened in the area on Saturday evening, and was also dispersed by police.

The public prosecutor has since opened an enquiry into the party organisers for putting the lives of others in danger.

The government has come under fire for its handling of the two events on the same evening in the French capital.

One Twitter-user likened the situation to inequalities under the Ancien Régime, which was overthrown by the French revolution: “A handful of privileged people are allowed to enjoy themselves thanks to a decision from the king, and the paupers outside are dealt with by police.”

But Citizenship Minister, Marlène Schiappa, said the party goers in Paris had to be dispersed by police as a safety measure, “because the virus is still here”.

She added: “I understand and share the feeling of people who want to get together and go to parties. I know how much young people have sacrificed.”

Ms Schiappa said that a solution was needed to enable parties to go ahead with barrier measures in place, as is being done at sports events.

At Roland Garros, all spectators had to show a health pass upon entry, wear a mask and respect social distancing rules.

The same rules were in place at a football match between France and Bulgaria, held at the Stade de France on June 8, where fans were also allowed to stay after 23:00.

Stanislas Gaudon, representative for police union Alliance, told FranceInfo: “A tennis match in an enclosed space where there is social distancing is very different to the underground parties we saw on Friday and Saturday.

“There were thousands of people there. What happens if they have the virus when they go home, or go to work? They will infect others.”

He added that police resources were being stretched by having to enforce the 23:00 curfew, which is expected to end on June 30.

“We are working with the means and the staff we have,” he said. “Honestly we would prefer to do other things than deal with underground parties. If we have to manage dispersing gatherings every evening…bring on the end of the curfew in 15 days.”

What big events in France require a ‘health pass’?

8 hours ago
4
How will foreign visitors to France use the health pass for going out?