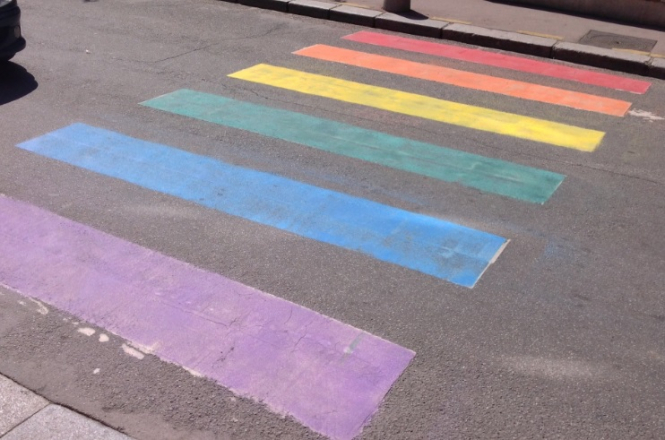 The initiative, from local LGBTQ (lesbian, gay, bi, trans and queer) advocate groups, transformed the usual black-and-white crossings into rainbow stripes as a visual sign of solidarity against homophobia.

The “rainbow flag” is a universally-recognised sign of gay pride.

Thomas Leroy, president of one group, Gay’T Normande, said: “The idea was to create an event with a strong visual identity, to show a message that is both festive and identifiable, without any outward protest or demands.”

The groups also distributed some flyers alongside the crossings, to “raise awareness among Rouen residents, with statistics showing that homophobia is not actually disappearing”.

Yet, the work was reportedly done without consulting the town’s Mairie, with authorities saying that the brightly-coloured stripes actually contravene the rules of the road.

A statement by the Ville de Rouen read: “The road code stipulates that a walkway must be white, with a pedestrian crossing demonstrated through rectangular, white, reflective rectangles.”

Happily for the LGBTQ groups, however, the town has decided to allow the paint colours to wash away themselves, and will not be forcing the groups to remove them - for now.

The statement said: “We are not making a fuss about this because the initiative is rather sweet and does not pose any major problems.”

But the town statement added that if it takes too long, authorities still reserve the right to clean away the colours.

It said: “If there is a message from us about this, it is that any initiative such as this must receive proper authorisation from the town.”

He said: “The colours were placed using heavy-duty chalk, which washes away with strong cleaning or heavy rain.”

A statement from Gay’T Normandie said: “The idea was obviously not to damage public areas. If other similar campaigns take place in future, we aim to be more communicative and receive prior agreement from the town first.”

Despite Rouen’s claim that the coloured crossings contravene driving laws, the town is not the first in France to showcase a rainbow road.

In Périgueux (Dordogne, Nouvelle-Aquitaine), a permanent rainbow crossing was installed - and welcomed by the town authorities - in May.

It is not the first initiative to affect pedestrian crossings in recent months; in Cysoing (Nord, Hauts-de-France) , a “3D” paint-effect crossing was installed outside a school in a bid to make drivers slow down.

While rare, this measure was deemed lawful, as the rectangular stripes were still considered to be white enough - and visible enough - to adhere to the rules.