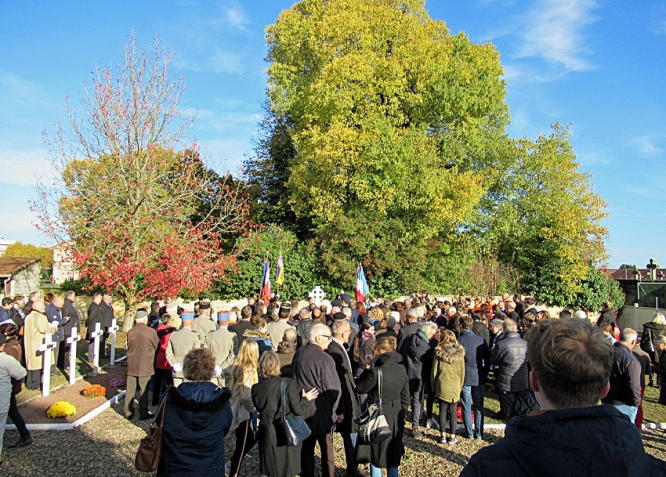 Former Royal Navy reserve Duncan Andrews, 69, decided to mark the occasion at the British war cemetery in Talence, Gironde, near where he and his family have lived since 2002, with a gun salute.

Mr Andrews, who served in the UK with the relatively little-known and short-lived Home Service Force – an offshoot of the Territorial Army – arranged with the town mayor to fire a salute with a 1918 SMLE MkIII rifle that he owns.

“Three rounds would be the normal salute at a military funeral,” he said.

He found what he described as “pukka” blank ammunition, and had the cases of the three rounds specially engraved to give to visiting dignitaries from the mairie, as well as the American and British consuls, “as a commemoration”.

“On the day, the weather was fine. There was a big crowd of people there – and a lot of schoolchildren came, too.

“The French are more inclined to keep children in the circle when it comes to things like wartime remembrance – of course, France lost so many men.

“To actually use a rifle that was built in 1918 seemed appropriate.”

The salute took place after the 11am silence and before the bugler sounded Reveille.

Mr Andrews is involved with the War Graves Photographic Project, which seeks to locate and photograph all of the world’s war graves and put them on a publicly available database (www.twgpp.org), which currently contains more than 1.7million images.

He believes he has photographed almost all the graves at sites between La Rochelle and Arcachon.