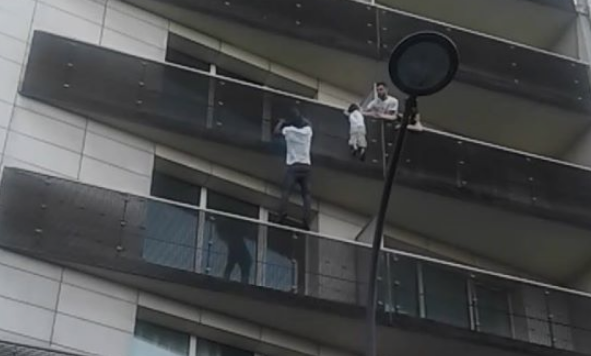 The child rescued from a fourth-floor balcony by "Spiderman of Paris" Mamoudou Gassama had fallen from the balcony above, according to reports.

Mr Gassama's heroic scramble up the outside of a building in the 18th arrondissement on Saturday evening was captured on film and posted on to social media, where it has been views several million times. The Malian, 22, has been rewarded for his bravery with honorary citizenship and a volunteer firefighter's job.

A neighbour told Le Parisien that the boy had grabbed hold of the fourth-floor balcony after he had fallen out of a fifth-floor apartment.

The boy's father is due in court on charges of failing to fulfil his parental obligations, which carry a sentence of up to two years in jail, after leaving the boy home alone to go to a shop. The boy's mother, who was on Réunion at the time of the incident was due to return to France on Tuesday.