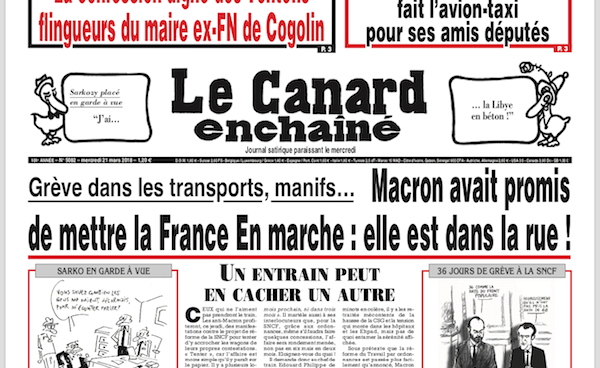 Le Canard Enchainé says Mr Macron promised to get France moving... and people were on the streets
By Connexion journalist

Schools across the country have been severely hit with many schools running only the minimum service and parents asked to give children picnics instead of school lunch as canteens are closed.

Leading primary school union, SNUipp-FSU, which is calling for more teachers to meet government moves to change class sizes and to not close classes, says one in 10 primaries in Paris is shut.

One in five teachers has walked out in Dordogne, 35% are on strike  in Lozère, Alpes-de-Haute-Provence and Seine-Maritime, 45% in Gers, 50% in Creuse and Paris with a 55% walk-out in Seine-Saint-Denis.

However, the union said many teachers had refrained from walking out for fear their protest would be lost in the clamour over the rail dispute, where half of local TER trains are not running.

Barely one in three trains is running in Ile-de-France and there are heavy cuts to other services with three in four Intercités stopped and 60% of TGVs.

Flights out of Paris Charles-de-Gaulle, Orly and Beauvais have been cut by a third while Air France has said it is managing to fly 60% of its short-haul flights, 75% of medium-distance and all long-distance flights.

Air crews are walking out as part of a demand for a 6% pay rise – they have been offered 1%.

Hospital staff are among many public servants to have stopped work to protest budget restrictions and for more staff in care homes.

Reaction to the strike has been mostly on party lines but right-wing Hauts-de-France council president Xavier Bertrand found a novel option to rail strikes in calling for rail workers to let the public travel for free. “Why not guarantee passengers free travel? It hits SNCF management without hurting ordinary people.”

However, he added that people had elected Mr Macron for change and “zero reform is no longer an option”.

Elsewhere, newspaper Le Canard Enchainé found its own slant, saying in its splash headline that Mr Macron had promised to get France moving (en marche!) and now they were on the streets.

Rail unions have called strikes two days a week from April 3 until June 28.

With rail workers leading a protest march at 13.00 from the Economy Ministry at Bercy in Paris to the Bastille, news organisations have set up their own method of counting the marchers – hoping to end the situation where strikers say half a million people are on the streets and police estimate just a few tens of thousands.