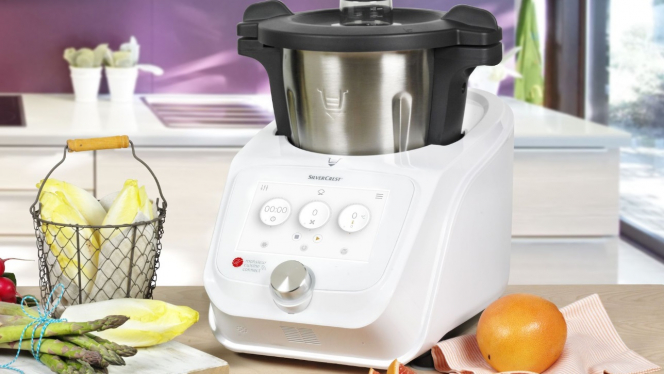 The Monsieur Cuisine Connect, a low-cost "smart" (meaning, "able to connect to the internet" ) kitchen mixer designed to rival models such as the Thermomix, has been sold by Lidl in France since June 3.

The highly-anticipated gadget is designed and made in China by SilverCrest, and sold by Lidl in France, Germany, Belgium, Switzerland and the UK. Costing just €359 compared to the Thermomix TM6 at €1,299, it was met with impatient crowds on its first day in France.

But it has since emerged that the mixer is equipped with a microphone, a fact not mentioned anywhere on the packaging, labels, or user manuals; an investigation by technology and science network Numerama revealed.

Manufacturers included the microphone into the design as a way to prepare the device for potential voice controls in future, along similar lines to Amazon’s artificial intelligence voice control system, Alexa.

Manufacturers envisage that Alexa could one day connect to the device too.

Currently, the microphone is not activated or connected, and cannot be switched on remotely by Lidl. However, its software - which would be used should voice controls be brought in - could leave the microphone vulnerable to malicious hacking, critics have said.

This is because the mixer works in tandem with a tablet that uses an older version of the Android operating system, for which the final security update was rolled out in October 2017, Lidl confirmed.

But all connected “smart” devices must receive regular security update “patches”, which protect them against hacking.

As a result, even though the Monsieur Cuisine Connect microphone device itself is dormant, its software could potentially be exploited and used to activate the microphone remotely, thereby giving hackers a recording line into people’s homes.

Michel Biero, buying director at Lidl France, said: “When developers launched Monsieur Cuisine, they planned for the device to be voice activated, and eventually to be connected to Alexa, but [currently] the microphone is ‘totally inactive’.”

He added: “Risks of hacking exist, but in the same way as for any tablet or device.”

However, critics maintain that the lack of security updates for the tablet software mean it is less protected than other devices.

The issue is becoming more common as more devices become ‘smart’ and connected. At the beginning of the year, tech giant Google came under fire after its Nest Secure alarm system was found to have a microphone installed, without having informed consumers.

This was discovered in February, after Google announced a new update that would allow the system to be voice-controlled.