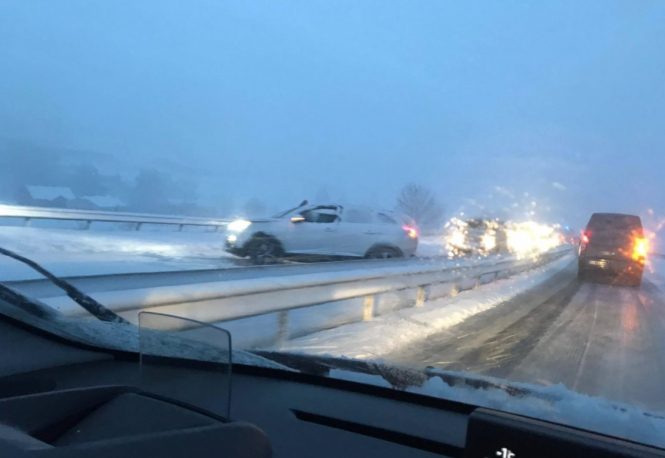 Roads were disrupted as Storm Bella wreaked havoc across France with snow, ice, winds, rain and flooding
By Hannah Thompson

France is still on alert for strong wind, storms, rain, flooding, snow and ice as Storm Bella continues, after having already left 34,000 homes without power, and caused “sea foam” to spread in Brittany.

A total of 63 departments are still on yellow alert for high wind, rain, flooding and storms.

Overnight, snow hit the Massif central at altitudes above 600-700m, with up to 50-70cm of snow falling in some areas, causing major disruption on the roads as cars became stuck in the drift.

Across the country, almost 34,000 homes were left without power as Storm Bella hit, but electricity company Enedis said that this had been reduced to 10,000 by yesterday evening (Monday December 28), with engineers working to reconnect homes as soon as possible today, weather permitting.

An Enedis spokesperson said: “90% of clients that were affected by Storm Bella have been reconnected [especially in Normandy, Brittany, Picardie and Nord-Pas-de-Calais].

“But overnight, high snowfall and violent winds were also recorded in Auvergne and in the Limousin, causing negative effects across the network.”

The inclement weather also caused the rare phenomenon of “sea foam” to hit the town of Saint-Guénolé in Finistère on December 27.

Foam from the rough seas collected on the coastline and was then picked up and spread across the town by the wind, causing foam to “rain down” in the streets and along the seafront, looking similar to snow as it covered the streets.

Snow and rain are still expected from Grand Est to the Alps; along with wind of up to 70-80 kph on the coasts; plus storms, rain and wind further towards the south and southwest, and the Atlantic coast.

The Pyrenees and Massif Central are both expected to receive more snow, of around 5-15 cm; and flooding may occur in the south of Aquitaine.