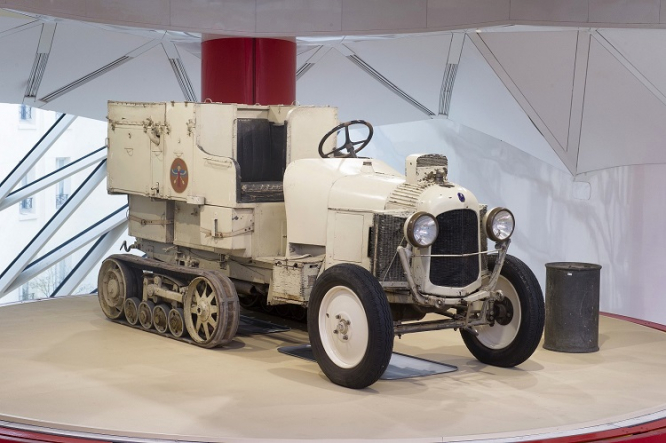 French students are rebuilding a 1920s Citroën which crossed the Sahara – above, the original Scarabée d’Or car and below, the car in action in the crossing
By Connexion journalist

That means they can unveil the car for Citroën’s 100th birthday – and they are considering recreating its epic journey.

A spokesperson said: “For the moment our aim is to exhibit the car to the public but, given favourable geopolitical conditions, we’re not ruling it out.”

The original vehicle was a purpose-built 10-horsepower car based on the Citroën B2 (which was Citroën’s second car and the second European mass-produced car).

However it was a ‘halftrack’ version (autochenille in French) with caterpillar tracks replacing the back wheels, giving the cross-terrain ability of a tank and manoeuvrability of a car. Citroën called this arrangement their système Kégresse, and the car’s model number was K1.

In December 1922, a convoy of five of the cars drove from Touggourt in Algeria across the desert, arriving 21 days later on January 7, 1923 in Timbuktu, Mali.

They then drove all the way back again - a distance of 3,200 kilometres.

Each car had a name; the lead one, Scarabée d’Or, driven by Georges-Marie Haardt and Louis Audouin-Dubreuil, was officially the first to make the crossing, and is still owned by the manufacturer.

The expedition was filmed and the footage can be viewed at scarabeedor.org

The 10-man team camped along the way, sleeping under canvas and preparing all their own meals and repairing the cars using equipment carried by the convoy. There were no other support vehicles.

According to the film’s commentary, they enjoyed the adventure tremendously, met all sorts of local people and celebrated with champagne.

An association called Des Voitures et des Hommes is responsible for the building of the replica to celebrate the feat.

The project, “Le Scarabée d’Or”, aims to raise awareness of France’s technical heritage and to present a challenge to the young engineers.