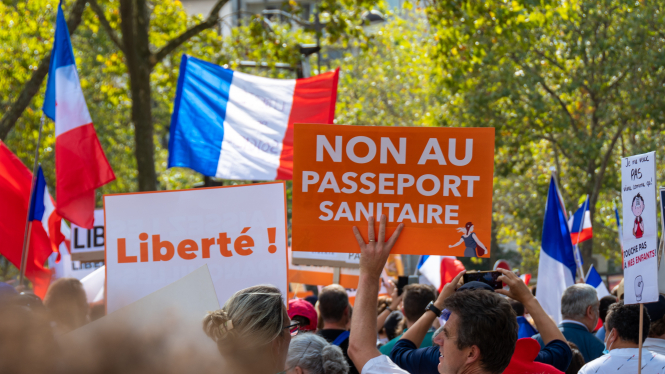 The 34-year-old teacher who waved a sign bearing an antisemitic message during a protest against the French health pass has been served a six-month suspended sentence for “inciting racial hatred.”

Cassandre Fristot, an ex-Front national member and former councillor, was sentenced in her absence on Wednesday (October 20) at Metz’s criminal court.

The public prosecutor’s department had requested a three-month suspended sentence, but the judge handed her a heavier sentence.

Fristot was pictured on August 7 holding a sign covered with the surnames of several well known political figures and businessmen, along with the word “traîtres!!” (traitors) during a demonstration in Metz.

Also written on the sign was “Mais qui?” (But who?), which relates to a hashtag employed by conspiracy theorists who believe that Jewish people control the media.

Read more: French health pass protests: Who is the ‘qui’ mentioned on placards?

Fristot was also required by the court to pay between €1 and  €300 to eight anti-racism groups which were plaintiffs in the case, including Licra, the Ligue des droits de l’Homme and SOS Racisme.

“This sign was not very difficult to understand but [its message] was somewhat concealed in order to avoid criminal punishment, which is not very brave,” said Ligue des droits de l’Homme representative Annie Levi-Cyferman.

“However, the court was not fooled, so this is a victory over everything that constitutes incitement to hatred.

Ms Levi-Cyferman added that the sign “was not within the frameworks of democratic debate but was a crime. [This woman] is a criminal and she has been convicted for failing to respect the rules of the Republic.

“This is a defeat for her. She has always denied [it], she acts the frightened, naive maiden, but really she is a seasoned far right militant who carries the far right’s traditional antisemitic values.”

Fristot had denied that the sign was antisemitic, claiming when questioned by police that “I wanted to denounce people in power, it is their decisions that I hold against them and not their religion.”

She was suspended from her job as a German teacher after images from the protest surfaced, and the contents of the sign were condemned by anti-racism groups and politicians including Minister of the Interior Gérald Darmanin and Minister for Education, Jean-Michel Blanquer.