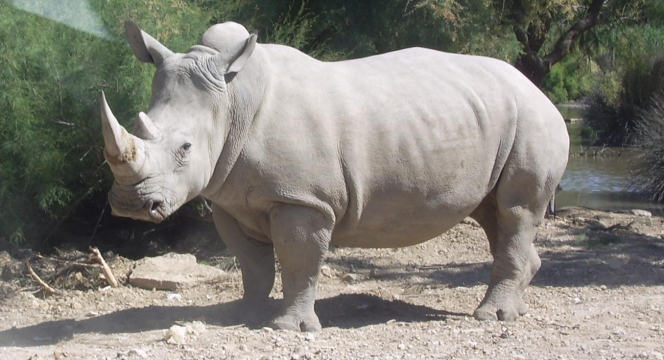 The new white rhino, named Unesco, will join Thoiry this Thursday (January 25). He was born on March 11 2015 at the Peaugres safari park in the Ardèche, explains news source 20 Minutes.

The move will separate Unesco from his parents - who will remain at Peaugres - but, the zoo confirms, he will be “staying within the same ‘big family’, because the Peaugres safari park is part of the Thoiry group”.

Thoiry is already home to two other white rhinos - Bruno, aged 5, and Gracie, aged 37 - and it is reportedly common to move such animals between zoo, as a means to “maintain maximum genetic mixing”, explained Thoiry.

Unesco was the second white rhino in five years to be born at Peaugres - one of the few dedicated white rhino breeding centres in Europe - after the birth of Goliath in 2012.

His birth, along with that of Goliath and Bruno, were considered to “represent a real hope for the conservation of the species”, said Thoiry. White rhinos nearly disappeared in the 19th century, and continue to be threatened by high levels of poaching.

Unesco’s arrival at Thoiry is even more poignant, as he arrives almost one year exactly after zookeepers found the dead body of their former rhino Vince - who was four years old - after he was shot in the head by poachers, and his 20cm-long horn sawn off.

The incident was said to have been unprecedented in any European zoo, and prompted then-minister for Ecology, Segolène Royal, to speak out strongly against the already-illegal practice of elephant ivory or rhinoceros horn trading.

No suspects of the poaching have yet been officially identified despite a long investigation by the Yvelines Gendarmerie, although the latter have calculated that the horn would have been worth up to €30,000-40,000 on the black poaching market.