Three hurt as buildings collapse with nine inside in Bordeaux 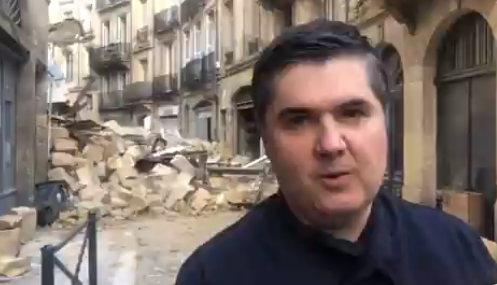 At least three people were injured when two buildings collapsed in Bordeaux shortly after midnight overnight Sunday to Monday.

One of the properties on rue de la Rousselle, near the Porte de Bourgogne, was empty and in the process of being renovated but the second had nine occupants.

Some 72 firefighters, using sniffer dogs to search the rubble, were involved in the search for victims. They used a long ladder to evacuate five people from an upper floor that had not fallen in. The town hall opened the Palais des Sports to accommodate the victims.

One of the victims pulled from the rubble was described as 'very seriously hurt'. But emergency personnel described the low injury toll as 'almost miraculous' - after calling off their search several hours later.

It is the second building collapse in a matter of days in the southwestern city. On Wednesday, an empty two-storey building that had been condemned collapsed in the Saint-Michel district. No one was injured.