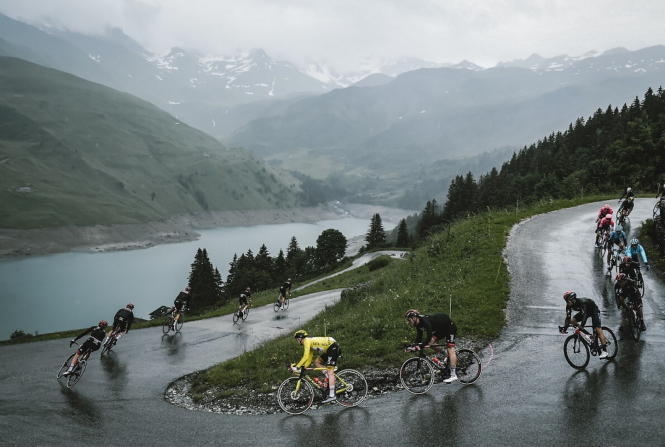 Conditions were difficult in the Alps, with rain and low temperatures Pic: A.S.O./Pauline Ballet

The Tour de France resumes today after a rest day, with riders starting their third week of racing in the Pyrenees, chasing each other up mountain roads so steep some people cannot even walk up them.

After last year’s out-of-season and no-spectators tour, 2021’s cycle race has so far lived up to all expectations, with each day bringing sensational stories.

All of France rejoiced as the coveted maillot jaune (yellow jersey), awarded with lots of prize money each day of the race to the overall leader, was won on the first day of the three-week race by Frenchman Julian Alaphilippe. He crossed the line looking splendid in his white and rainbow jersey.

For those who do not follow cycling, the current UCI World Road Champion was wearing it because it is awarded annually to world champions in cycling’s many disciplines – not as a statement of Gay Pride.

So far, other highlights have seen a Lazarus-like resurrection of British sprinter Mark Cavendish, and a series of spectacular crashes which led to a strike by the racers. We have also seen a young Slovenian, Tadej Pogacar, taking a grip on the race, leading to speculation about the doping past of his team managers. Two of them were with the 2008 Saunier-Duval team which was dissolved after positive performance-enhancing drug tests.

The opening day also saw two severe crashes, with tightly packed racers in the peloton (the main mass of riders) falling at speed and being hit by those behind and beside them.

Some riders were knocked out or had compound bone fractures.

Worst of all, the first crash was caused by a young woman who stepped into the road after the motorbike TV cameras had passed, looking at the cameras and not the approaching racers, and holding a handmade sign saying ‘Hi Granny and Granddad’, in a mix of French and German.

After being spun around by a racer and nearly being knocked off her feet, and looking aghast at the horror around her, she took to her heals, surrendering to the gendarmerie days later after death threats and worse against her poured out on social media.

Tour de France organisers withdrew their legal complaint against her “because she is sorry and loves the tour” but prosecutors seem less forgiving and she is likely to be in court accused of negligence leading to injury.

Caught in one accident was British rider Chris Froome. A winner of multiple tours in times past but still recovering from a crash two years ago when he went into a wall at 60kph and nearly died, Froome lost 15 minutes and any chance of finishing in the top 10 riders this year.

Alaphilippe’s yellow glory did not last more than a day, but his successor was the next best thing for France, a Dutchman, Mathieu van der Poel, one of whose grandfathers was Raymond Poulidor, a French Tour de France legend for finishing second or third in eight races – but who never once won the yellow jersey.

Van der Poel was reduced to tears when asked about his grandfather, who died in 2019, leaving French TV panels and, no-doubt, thousands of TV watchers, moist eyed too.

Day three saw more crashes, which took out contenders both for the overall standings and the sprint races – and this time the racers blamed narrow winding roads through the Brittany countryside and speed bumps in the villages.

Day four bought more tears – this time from Mark Cavendish, the Manx sprinter specialist who won the day’s race. It was his 31st Tour de France sprint win, 13 years after his first sprint and two years after thinking his cycling career was over when he caught a dose of Epstein-Barr virus which left him bed-bound and then suffering from clinical depression.

Riders also stopped in the middle of the road, in a strike to protest against all the crashes, but only for a short time.

As the race went on, Cavendish won three more sprints meaning he equalled the record of stage wins held by the Belgian cycling legend Eddy Merckx, who retired from professional cycling in 1978.

He has praised his team, including Alaphilippe, who have ridden like the wind to put him in position to unleash his explosive sprint speed.

Merckx, also known as Cannibal, for ‘eating up’ his opponents, was ungracious, saying a mere sprinter should not be mentioned in the same breath as a great all-rounder like him.

So far Cavendish has managed to stagger through the mountain stages without being swept up by the bus which follows the racers and collects those who are too far behind to continue. His body shape, short and square, means he will never go fast up the hills.

This means that there is a chance he might make it to the next likely sprint finish in Paris on Sunday, the last day of the race, where he might overtake Merckx’s stage win total.

Some of the mountain stages, especially in the Alps took place in temperatures of around 5C, with wind, rain and ice leaving riders on the verge of hypothermia.

In yellow since day eight of the race, Pogacar, 22, looks guaranteed to win the overall race, if he avoids crashes, with the second-placed riders changing with the stages.

He shrugs off the suspicions of doping, saying he is of a different generation to riders caught up in past scandals.

The French public might not wholly believe him, but it will not stop them from following what they call the Greatest Race on Earth.

For those who have their afternoons free, it is worth watching free of charge on French TV, with spectacular shots of the racing and the French countryside.

However, be warned, it is addictive, with every day bringing a new story.