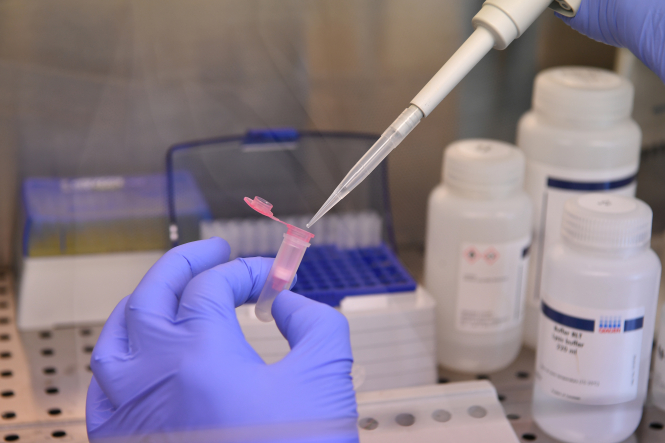 PCR tests in France are currently only taken via nasal swab. Mr Lina said that using saliva samples to test for the virus was a possibility in the future
By Joanna York

Mr Lina is a member of French scientific advisory body le Conseil Scientifique, a professor at university hospital CHU in Lyon (Auvergne-Rhône-Alpes) and a researcher at the International Centre of Research into Infectious Diseases.

Read more: When, where and how to get tested for coronavirus in France

Priority access to tests ‘must be given’ to sick people

When asked in the interview about who should be given priority when it comes to PCR testing in France, the doctor identified two separate groups: those with Covid-19 symptoms, and those who require documentation confirming they do not have the virus in order to travel.

“It is clear that the priority must be given to patients rather than travellers,” he said.

“We need to be able to give extremely quick diagnoses to people who have symptoms in order to identify both cases and contacts. That’s how we will be able to halt the start of the virus circulating.”

In the interview, Mr Lina confirmed that laboratories in France are currently capable of processing 700,000 PCR tests per week.

Although some doctors have urged a cautious approach to making tests more available, Mr Lima says the testing process has been simplified by the removal of logistical barriers such as allowing people to access tests without a prescription.

However, he believes there are still steps to be taken to ensure that tests can be done in a timely manner. He said: “We need to develop testing centres and human resources to be able to do tests in a quicker way in relation to when symptoms start."

Referencing the government’s tracing system, he added: “You can’t have someone who is tracked down and then given an appointment in three days, especially if they have symptoms.”

PRC tests (polymerase chain reaction tests) are taken by inserting a cotton bud into the nostril take a nasal swab. They reveal whether the person taking the test is infected with Covid-19 at the time they take the test.

According to Mr Lina, training a wider range of health workers to administer PCR tests would be a fairly straightforward process. Training only takes a half-day and plastic mannequins can be used to practice on.

While PCR tests in France are currently only taken via nasal swab, Mr Lina said that using saliva samples to test for the virus was a possibility in the future. However, the process requires different technology from nasal swab tests which France is not currently able to provide “on a large scale”.

Barrier measures must be 'stepped up' in France

When asked about the increase in cases of Covid-19 in France, the doctor agreed that indicators show circulation of the virus is higher since deconfinement.

“The comfortable situation we were in three weeks ago no longer exists. That’s clear,” he said.

Mr Lina recommended “stepping up” barrier measures such as mask-wearing indoors, as well as reinforcing other barrier and hygiene measures.

While a new law will make mask-wearing mandatory indoors in France from July 20, Mr Lina advised that people increase their use of masks immediately.

“We can make ourselves wear a mask straight away,” he said. “We don’t have to wait for the law to be enforced.”

The full interview with Mr Lina can be read in French on Franceinfo.