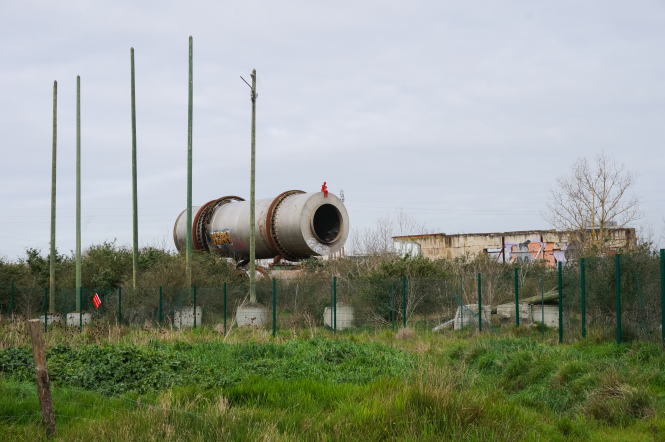 Ruins of the destroyed factory are still standing on the abandoned site Pic: DEspeyrac / Shutterstock

The explosion was the largest industrial catastrophe to happen in France for many decades, killing 31 people, and injuring 1,500.

Every year on September 21 a siren goes off at 10:17, the time of the explosion, and a minute’s silence is observed on the former factory site.

This year, Toulouse Mayor Jean-Luc Moudenc unveiled a remembrance walk around the existing memorial, which is composed of nine panels that explain the history of the factory and the disaster that happened there.

On September 21, 2021, hundreds of tonnes of ammonium nitrate exploded in the factory, causing a blast that left a six-metre deep crater, 5km south of the city centre of Toulouse.

The factory itself was completely destroyed and serious damage was caused to buildings in the southwest of the city including schools, shops and homes.

The sound of the explosion could be heard from 80km away, and it caused a seismic shock of 3.4 magnitude.

A Connexion reader, who was living near Toulouse (11km west of the city) at the time, remembers the explosion clearly.

The woman, who asked not to be named, said: “I was 13, and I was at school, in history class, when it happened. There was a huge ‘boom’ and all of the windows and doors of the school blasted open suddenly. None of us knew what it was.

“We all got sent home very quickly after that, and people were being warned to cover their faces and not to go outside. We didn’t know what had happened, what the cause of the explosion was, or if the cloud was toxic. It was all very uncertain.”

The initial chemical reaction was caused by a factory employee spilling 500kg of chlorine over ammonium nitrate stocks. However, the ammonium nitrate was being stored in an unsafe way to begin with, and investigations found that conditions in the hangar before the explosion, which were confined and humid, also contributed to the scale of the blast.

Ultimately the courts convicted the company who ran the factory, Grande Paroisse, and factory director Serge Bichelin, of involuntary homicide and injury.

Of the 31 people who died, around 20 were factory employees. The majority of physical injuries caused were to people’s hearing due to the impact of the explosion, or by flying debris such as shards of glass.

The incident also had a deep psychological impact, with some estimates saying 18 months later 14,000 people were being treated for related sleeping problems, anxiety and depression.

Our reader told us: “It was even more strange and frightening because it happened just after 9/11 [which had happened just 10 days before].

“Everyone was still reeling from that, and then we had this massive ‘boom’ near us. No-one knew if it was a terrorist attack, bomb, explosion, or what. It was scary.”

What protections exist in France for dangerous chemical factory sites?

The AZF factory was covered by a ‘Seveso II’ directive, which had come into force in 1999.

That had replaced a directive from 1982 that was designed to offer more protection following industrial accidents in the 1970s, the European Commission (EC) heard in a debate on the subject in 2001.

The AZF factory managers had carried out risk assessments to comply with this directive, but this had not included ammonium nitrate.

After the disaster, the EC debated the introduction of a new article in the Seveso II directive, which would regulate the separation of hazardous sites and inhabited areas or places where the public are likely to be present.

‘Seveso’ directives are EU classifications of factories that store or use dangerous chemicals in France. They are named after the Italian town of Seveso, which suffered a terrible industrial accident in 1976.

They are aimed at preventing major industrial accidents, and to limit any consequences of their use for humans or the surrounding environment.

Chemical sites are classified by the risk they pose, within the Seveso directive. These include ‘Top Tier’ and ‘Upper Tier’ establishments, which are the most dangerous.

The regulations of Seveso III also state that sites must now  “consider dangerous substances that it is reasonable to foresee may be generated through loss of control”.

The goal of the classification means that should anything happen, emergency services and responders have a set process of how to react and what to expect.

Where are Seveso factories and sites in France?

There are currently 1,171 Seveso sites across the country, which are classified as such due to their storage or use of potentially-risky industrial chemicals.

They are generally found in more industrial and built-up areas, such as Paris, Marseille, and Lille, but some are located in more rural places such as Dordogne.

After the explosion and fire at an ExxonMobile Seveso site in Rouen, in October 2019, the website Sciences et Avenir compiled a map of where such sites can be found across France, using data from the French government.

You can zoom in on the map, and click on each ‘dot’ to find out more details about the site located there.

Residents in France have a legal right to contest plans to build any new Seveso site near them, if they believe that the correct channels and safety regulations were not followed during the installation of said site.

Despite the directives, chemical incidents continue to happen in France.

The most recent Lubrizol explosion in Rouen closed schools, affected food, forced people to leave their homes, and caused a plume of toxic smoke to travel as far as the UK; while another chemical factory of the same kind was closed just a week later for security reasons.