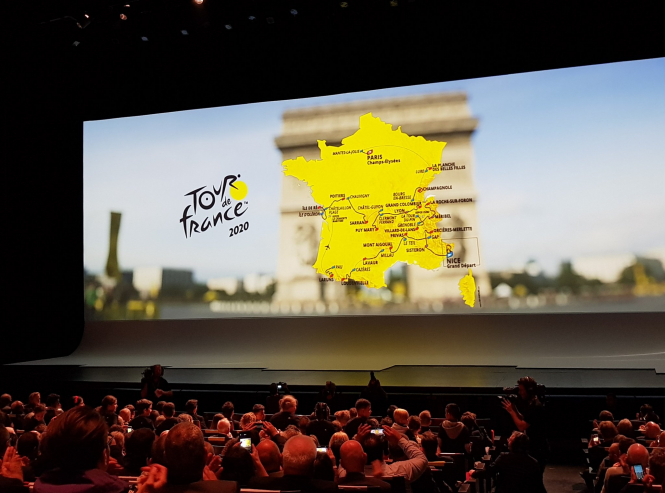 The full route of the Tour de France 2020 race was revealed yesterday, to criticism from some
By Connexion journalist

Christian Prudhomme responded to critics after the revelation of next year’s race route, which will largely focus on the south of the country - including many mountain summit climbs - and begin in the southern city of Nice.

He denied that the Tour focused unfairly on routes through the south of France, and said: “In the last five years, we have been everywhere.

“Today, with 3,500km of race, we cannot pass by everywhere...In 107 races, [next year] will be only the seventh time that the Tour de France is starting in the south, and that allows to be in the mountains very quickly.

“We want to make the race more varied.”

Responding to critics from Brittany, who are disappointed by the 2020 route - which does not include Brittany at all - Mr Prudhomme said: “We will obviously go back to Brittany [in future races]. We did four stages there in 2018.”

Mr Prudhomme also admitted that the 2020 would be exceptionally challenging for the cyclists, largely due to the succession of steep climbs and mountain summits, beginning with the new Col de la Loze above the Méribel station, in the Savoie (Auvergne-Rhône-Alpes).

News website FranceInfo has created an interactive map, which shows the number of times that the Tour de France has passed through each department.

Map: FranceInfo / Datawrapper (Click to interact and check your department)

As the map shows, the departments most likely to be visited by the Tour tend to be in the mountains or nearer the coast or borders of France. Those less likely are located towards the “centre” of the country, such as the Cantal, Creuse, Lot, Corrèze, and Indre.

Charente also has the dubious honour of having the longest time to wait since its last visit; the Tour route has not visited there since 2007. Similarly, neither Nievre, Yonne, Loiret, Seine-et-Marne nor Gironde have been visited since 2010.