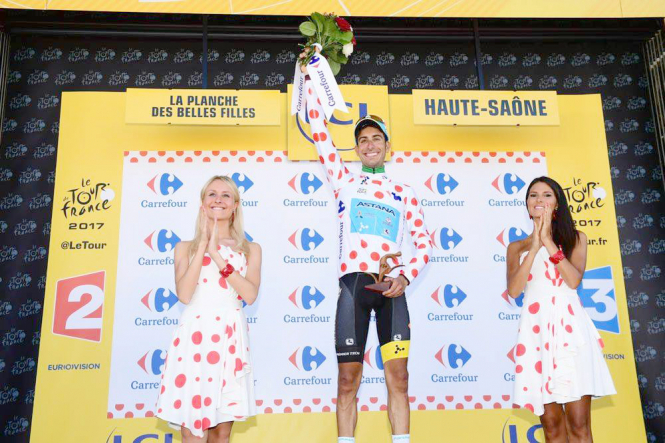 Tour de France organisers say they will not be getting rid of the traditional ‘podium girls’ for this year’s event, which starts at Noirmoutier-en-l’Ile on July 7.

They were denying widespread reports that the women would be absent after Paris mairie said it did not want to see hostesses on the podium at the finishing line on the Champs-Elysées on July 29.

It followed controversy last year when Belgian cyclist Jan Bakelants had to apologise for sexist remarks about the hostesses (he said he always had a condom with him in case he met up with some) and a report on French TV where women working in the race’s publicity caravane said that sexual harassment was common.

Tour promoters, Amaury Sport Organ­isation, told Connexion: “Director Christian Prudhomme has already told the media, there will be hostess girls on the Tour de France podiums, just as men are present on the podiums for women’s races.”

The hostesses are employed by Tour sponsors but none replied to our request for an interview.

The Spanish Tour de la Vuelta now uses stewards and hostesses and Australia’s Tour Down Under has junior cyclists on stage.

Formula 1 stopped using ‘grid girls’ this year and it comes four years after Miss World banned bikinis. Doubts started over the podium girls when Paris mairie wrote to Tour organisers and Sports Minister Laura Flessel asking that they be replaced by young sports champions so that “a stereotypical image of women” would no longer be presented to the world.

“One day everyone will understand this type of ceremony is old fashioned and it is more interesting to have young sports- people on the podium. I am confident it will be banned eventually but the fight for equality between the sexes is a long one.”

This year’s Tour features 176 riders in 22 teams racing 3,329km in a route that misses Central France. From Vendée it heads to Brittany, Roubaix in Hauts-de-France, then Savoie across to Occitanie, the Pyré­nées and Pays Basque before the Paris final leg.

Four-time winner Chris Froome is back after his historic treble of the Tour, Vuelta and Italian Giro but other riders, Tour icon Bernard Hinault and Mr Prudhomme have criticised him over a drug test anomaly.