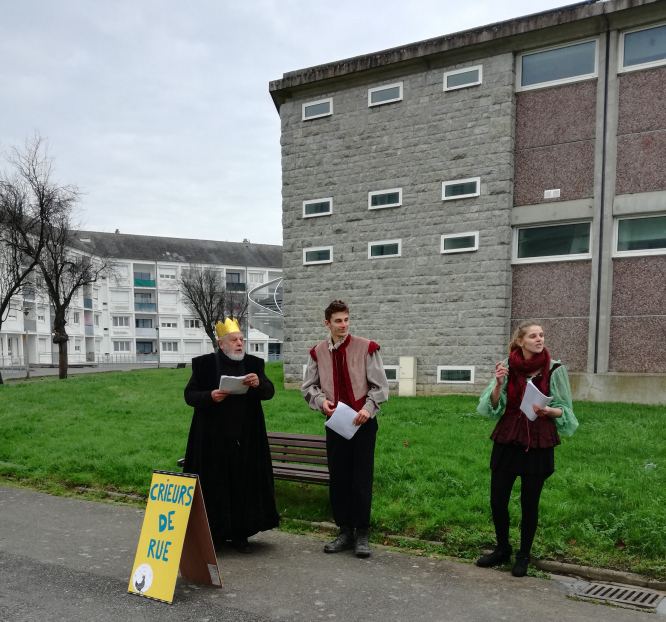 The town criers’ troupe performs on an estate in Dinan, Brittany
By Connexion journalist

Town criers were employed by a French town to cheer people up – and it worked.

Dinan, in Brittany, decided to try it out when the second confinement was announced and was surprised by the positive reaction from locals.

Elisabeth Louzel, manager of the Atelier du 5bis association which ran the scheme, said: “Our main concern was for the single people in the town, some of whom had a hard time during the first confinement.

“Dinan has a large historic quarter but they also go out into an area where there are HLM [social housing] homes and the response from both areas has been very positive.

“We were not sure people would like it, but now intend to go on until the end of December.”

The town employed three members of the Une Aile la Nuit professional acting troupe to be the criers.

They divided their cries, which took place twice a day, twice a week, into information about the town, poems and stories sent in by the public, and jokes and short news items.

'What was very noticeable is that people stop what they are doing and listen, the level of background noise falls, and you see some windows open'

“I have even seen in the HLM area that youngsters who were outside playing music loudly turned the music down without being asked so they – and others – could hear too” said Ms Louzel.

Personal messages, of the type “Jean sends his love to Julie”, were not allowed. Instead the scheme instituted competition among residents for punning rhymes, with people sending in contributions, mainly by email.

“It has taken on a life of its own, which is something we did not expect,” said Ms Louzel.

Town criers were used all over France in medieval times and their use persisted in some areas, such as Dinan, right up to the 1880s.

Under Napoleon III in 1864, the job was regulated, and the criers had to obtain municipal council approval.

Morgane Jéhanin, 25, one of the founders of the troupe Une Aile la Nuit, told The Connexion that the town crier job was “very welcome”.

“We started in 2019 and things were going well, and then everything came to a stop because of the first lockdown. In the summer, we had some work, and then it all stopped again for the second.”

There are three members of the team who do the cries and Ms Jéhanin said the oldest, who is 66, found the vocal technique easiest.

“He had different training and found the right way to project his voice quicker than I did, or the other youngster. But it is something I quickly learnt how to do,” she said.

The troupe was set up to tour France with minimal stage settings and so sometimes performed outside – but being a town crier is a different sort of acting, she said.

“When we are in the town centre, you get a bit of a reaction from passers-by and some stop for the whole cry, while outside schools and old-age homes, people often come to the window. In residential areas, it is usually a case of seeing a window opening.

“But it is encouraging to get the positive response we have had and see the suggestions and poems people send in to be read. We are happy to break people’s sense of isolation and bring a bit of joy into these strange times.”

British violinist’s concerts a thanks for French cancer care