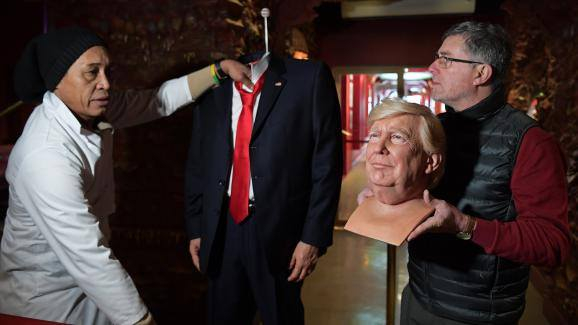 Supporters of former US President Donald Trump have demanded a Paris museum sell its waxwork statue of him after it was removed when he left office in January.

"Some even managed to find the telephone number of my home, including an Englishman [who was] very determined!" he said.

"The museum does not sell its statues. We do not play politics."

The statue has been dismantled and has been placed in storage in the Paris suburbs, he said.

He added that a light-hearted joke about perhaps reusing the effigy in a future Hallowe'en exhibition had led to "a surge of hatred and threats from pro-Trump [followers] on Twitter".

A likeness of President Joe Biden, who defeated President Trump in the presidential elections in November, will be in place when the museum reopens under strict sanitary conditions on May 19.

The museum's statue of President Trump had to be sculpted in record time because it had not expected him to win the Presidential vote in 2016. It took just two months to create and sculptors said at the time that the most difficult part to get right was his hair.

1 day ago
4
Covid France: Changing rules for testing and quarantine this summer