UFO spotted above Occitanie is the work of French prankster 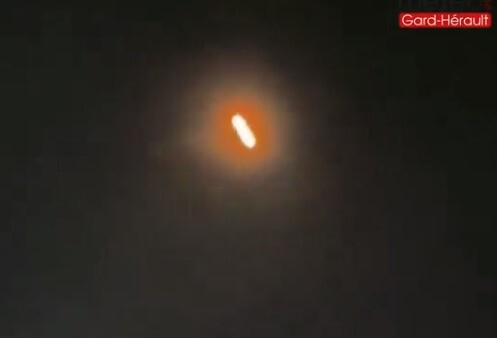 The ‘UFO’ was spotted by people in Montpellier, Perpignan, Narbonne and Andorra Pic: Météo Gard-Hérault

The mystery of an unidentified flying object spotted several times in the skies above Occitanie last week has been solved.

The oblong-shaped light travelling silently through the night sky was in fact part of a hoax created by French prankster Rémi Gaillard with the help of the local weather service, Météo Gard-Hérault, which had shared images of the object on its Twitter page.

Mr Gaillard, a former professional footballer, became famous in the early 2000s for videos posted on his YouTube sharing his outlandish sense of humour.

He has dressed up as Mario to race unsuspecting motorists, chased cars while disguised as a speed camera and surprised passersby while springing along the street in a kangaroo costume.

His YouTube channel has had 1.8 billion views in total and the latter ‘Kangaroo’ clip alone has been watched 90 million times.

Mr Gaillard has used this fame to raise awareness of animal rights issues, once staying locked inside a cage for 87 hours to raise funds for animal shelters.

In a video explaining the UFO prank on Twitter, Mr Gaillard thanked the media for relaying the images of the object.

“You often make people believe anything, and I thought that it was my turn,” he added.

In the video, he appears with Loïc Spadafora, the founder of Météo Gard-Hérault, and an animal sanctuary owner, Marie Sanchez, who had acted as his accomplices for the prank.

Both Mr Spadafora and Ms Sanchez featured in media reports surrounding the unidentified object, with Ms Sanchez claiming that one of her cows had been encircled by the light.

Mr Gaillard’s ‘UFO’ had been sighted by people in towns including Montpellier, Narbonne and Perpignan on Tuesday, Wednesday and Thursday (November 9-11).

Social media speculation had suggested that the UFO could have been a drone, a satellite, Father Christmas’ sleigh or French astronaut Thomas Pesquet returning to Earth from the International Space Station.

The true source of the light has not yet been established, but Mr Gaillard has teased a full video following his latest practical joke, which may explain how he brought it about.