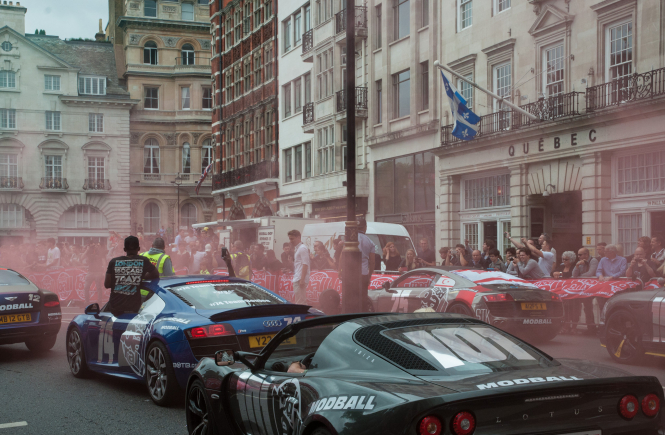 One of the drivers was clocked at 265kph on the A26 autoroute near Calais, police said. Others were travelling at more than 180kph, regional newspaper Voix du Nord reported.

As they were clocked driving at more than 50kph above the speed limit, they were immediately banned from driving in France. Police can hold licences for 72 hours, and the cases are then sent to court, where bans of up to three years can be imposed.

The drivers all passed breathalyser tests, and gendarmes did not confiscate the vehicles. No date has yet been set for the drivers’ appearances at court in Saint-Omer.

The speeding motorists were arrested at the peage de Setques, south of Calais, on the afternoon of Sunday, June 24. They were taking part in this year’s Modball rally, and were heading for Reims, then Paris, Lyon, Monaco and finally Vienna.

Passengers in the four vehicles who had driving licences were allowed to take the wheel and the high-powered supercars, a Porsche 911, Lamborghini Huracan and two Lamborghini Aventadors, were escorted by gendarmes to the French border.

“They did not break the speed limit again,” a police spokesman told The Connexion. “It is obviously very dangerous for the people in the car and for any other road users.”

French police forces have been on alert several times in the past couple of years for similar supercar races, which usually start in the UK and end at destinations in Italy or Spain. According to the Modball website, the 2019 event takes drivers from London to Ibiza, and costs between £2,995 and £3,995 to enter. In the past, vehicles taking part have included supercars, buses, fire engines, and limousines.