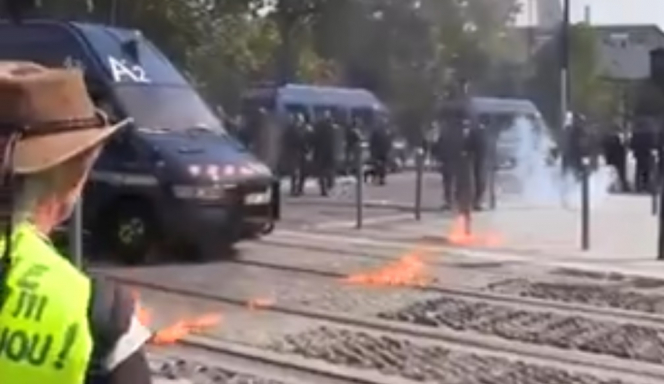 The weekend - specifically Saturday September 14 - is the 44th “gilets jaunes weekend” since the beginning of the movement in November last year.

Protesters said they had assembled under the twin banners of the gilets jaunes, and to protest in the wake of the death of Steve Maia Caniço, whose death has been linked to police brutality. They were there “against the powers that be”, banners said.

Some protesters showed up in masks and attempted to break down the doors and windows of a McDonald’s fast food restaurant; but most protesters stuck to the confines of the authorised protest area.

Police confiscated 22 Molotov cocktails, some fire starters and fire extinguishers, plus around 100 umbrellas.

Some shops in the centre closed in anticipation of damage.

Armoured vehicles, water cannon, and tear gas were used by the gendarmerie.

In Paris, around 500 gilets jaunes protested peacefully near the Eiffel Tower, and had dispersed by the afternoon.

Around 200 protesters gathered in both Marseille (Bouches-du-Rhône) and Montpellier (Occitanie), and there were 300 in Bordeaux (Gironde), according to police. Tear gas was used to disperse the crowds.