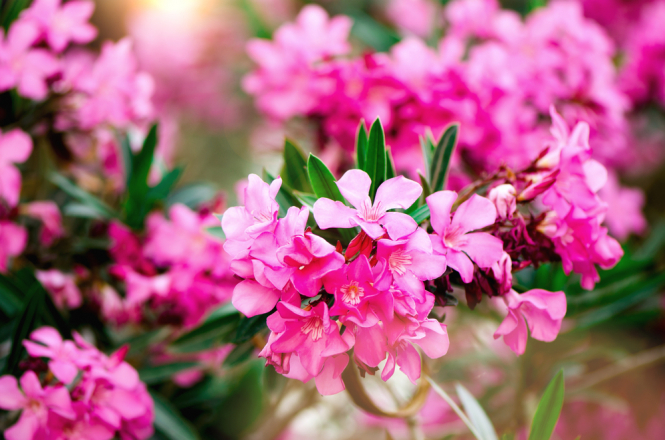 Common plants found in France can be toxic, such as oleander Pic: J.chizhe / Shutterstock

Watch out for poisonous plants in nature or in shops this summer, people in France have been warned, in a new alert from food and environmental safety agency Anses.

Every year, anti-poison centres receive between 8,000 and 9,000 cases of vegetable and plant poisoning, of which 700 are considered serious.

In a press release, Anses called for people to remain alert, and make sure they do not confuse edible plants with toxic varieties. Some plants can also be fine for humans, but toxic to pets.

All garden centres, plant shops, and shops selling plants for consumption (such as in salads), have been asked to help inform consumers of the potential dangers.

Sellers will need to provide a document accompanying the plants, including extra information on its characteristics, to inform the purchaser at the time of sale.

Thierry Lacanal, a greengrocer and owner of the Au Parfait Jardinier, told La Dépêche: “For a short while, we have had to make a list of vegetables and plants that could be dangerous for humans or pets available.

“This is especially the case for oleander or dieffenbachia, a green plant containing arsenic, which is a neurological poison.”

Mr Lacanal said that in his view, it is better to just not sell such plants, rather than taking the risk of a customer (or their pet) being poisoned.

He recalled the death of a man in Ariège a few years ago, after he ate some “datura, which is a hallucinogenic”, he said. Yet, datura grows freely, especially in fields.

Other similar plants can be fatal if ingested.

Sandra Sinno-Tellier, deputy director of health alert department Alertes et des Vigilances Sanitaires and coordinator of the Toxicovigilance at ANSES, said: “It seems that more and more people in France are going out to look for vegetables and plants and eating them in salads, or preparing home-made cosmetics.

“Most accidental cases at anti-poison centres have benign symptoms. But around a dozen very severe cases are seen each year, with one death on average per year.”

Some phone apps exist to help people identify plants properly, such as PlantNet, which allows users to take a photo of a plant and see its details.

But Ms Sinno-Tellier cautioned: “Apps seem tempting, and they can help. But we strongly advise people not to identify a plant solely by using a smartphone app, as this is not enough.

“You have to know for sure, or ask a pharmacist or horticulture expert.”

Gardening, growing-at-home, and horticulture are also increasing in popularity, Ms Sinno-Tellier said, but she warned people to be careful when paying for ‘botanical courses’ or other training.

She said: “There is not yet an official regulation on coaches that are offering environmental courses. It’s something that we still need to do.”

The Health Ministry has uploaded a list of 58 species of plants that can be dangerous for health, and which may be found in nature or in garden centres and shops.

They are in four categories:

The website also features a download with images of the most common plants that may cause issues, depending on the season.

If you notice any abnormal skin reactions to plants or anything you have ingested, you are advised to head to your nearest anti-poison centre or your GP as soon as possible.

In case of breathing difficulties or other emergencies, call 15 or 112.

Edible flowers in France: Pansies for the plate is a growing market
Herbal expert teaching ‘essential’ properties of plants and flowers
20-metre hedge stolen from outside town hall in southwest France
Back in fashion: How to care for ferns as houseplants