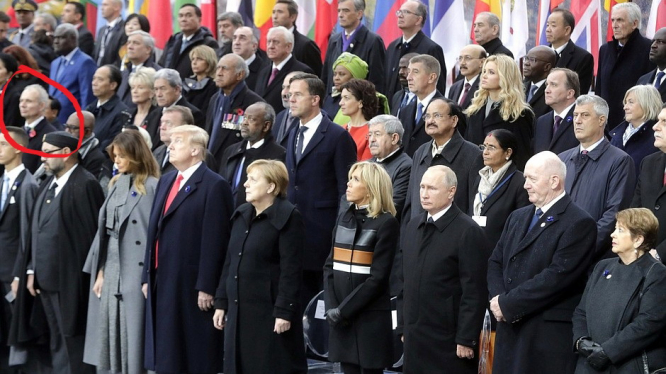 Reader Keith White from Paris wrote to ask: Can anyone explain to me why Theresa May did not attend the ceremonies in Paris this weekend to mark the 100th anniversary of the signature of the Armistice to end the First World War? Leaders from 70 different countries participated, many of these countries having had less significant roles than the UK.

The British Armed Forces were major participants and suffered major losses in the war but as far as I am aware the UK was entirely unrepresented.

We asked the British Embassy in Paris about the attendance of senior British government figures and they said that senior British representatives did attend in Paris yesterday for the actual 100th anniversary.

Both the ambassador, Lord Ed Llewellyn, and David Lidington, Chancellor of the Duchy of Lancaster and Minister for the Cabinet Office, attended the heads of state dinner at the Musée d’Orsay on Saturday evening, and the ceremony at the Arc de Triomphe and lunch at the Elysée yesterday. The Minister for the Cabinet Office is sometimes seen, informally, as the deputy head of government - for example on occasion standing in for the Prime Minister at Prime Minister's Question Time.

The ambassador also went to the commemorative service organised by the Royal British Legion at Notre-Dame cathedral yesterday afternoon, while Mr Lidington went to the Peace Forum organised at the Grande halle de la Villette, a cultural centre in the 19th arrondissement (north-est Paris).

An Embassy spokeswoman added that Theresa May did not attend events yesterday in France as she was attending the Cenotaph in London alongside the royal family. However she came to France last Friday to attend a ceremony in Albert (Somme) with President Macron. They also had a working lunch there.