'White Zulu' was loved in France 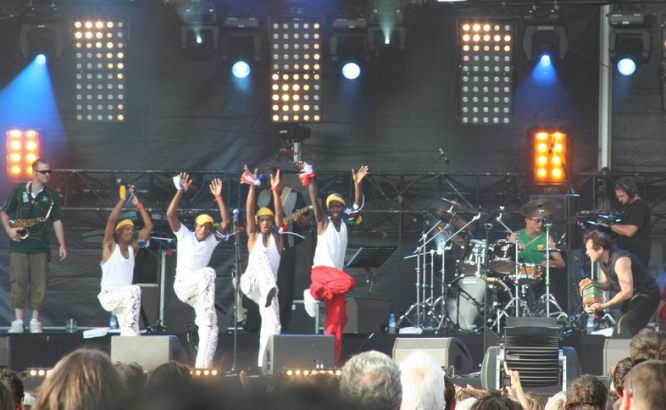 Johnny Clegg, right, performs at the Fête de l'Humanité in France in 2007
By Bruno Lacombe

In 2012 Clegg paid homage to the country saying he had had a long love affair with France: “France was the first country in Europe to understand my actions and the important cultural movement I represented.”

His popularity was shown in 1988 when Michael Jackson had to cancel a concert in Lyon during his Bad world tour because of low ticket sales while Clegg’s concert sold 40,000.

Clegg was born in 1953, at Bacup, near Rochdale in the UK, and moved with his mother to Zimbabwe as a boy, and then to South Africa.

He was attracted by the Zulu migrant workers playing guitar on the streets of Johannesburg and started to learn their music.

He studied anthropology at Witwatersrand University, focusing on Zulu music and dance, and as well as a musician, he became a lecturer.

This was at the time of apartheid. Le Zoulou Blanc, as he came to be called in France, flouted the laws in the 1970s to team up with a Zulu street musician, Sipho Mchunu, form a band, Juluka, and play in illegal mixed race performances.

In 1985 Juluka split up and Clegg formed a new group, Savuka, which mixed African music with wider international rock sounds.

They produced the two songs which quickly gave them international success: Scatterlings of Africa, and then Asimbonanga, which referred to the still imprisoned Nelson Mandela.

Later, famously, Nelson Mandela made an appearance with him on stage at Frankfurt in 1997.

His first concert in France was at Angoulême in 1986 at the Musiques Métisses festival.

He told the newspaper SudOuest that Clegg was at his marriage and stayed with him in South Africa: “He was a magnificent man, full of integrity and honesty. He became an international star, without seeking to be one.”

On his first visit to France, he attracted the attention of the celebrated French singer Renaud who travelled to South Africa to interview him for the popular TV show Les Enfants du Rock hosted by Antoine de Caunes.

Renaud was particularly struck by Clegg’s determination to fight apartheid and dedicated his song Jonathan to him.

They remained on good terms and in in 2006, Renaud produced his album One Life.

In 2017 Johnny Clegg already had cancer but he undertook a last world solo tour to say goodbye to his fans.

He told AFP it was a “kind of conclusion” to a journey that started when he was aged 14. “It has been a rewarding career in so many aspects… to be able to unite people through song, especially at a time where it seemed impossible.”

In that year he remembered that in 1986 he had thought that sales of 15,000 albums in France was a reasonable expectation for an alternative artist; his manager was more optimistic, aiming for 50,000.

In fact, Johnny Clegg and his band Savuka sold 1,5million in France, showing the strength of his following here.

His manager Ronny Quinn said he died peacefully at his home in Johannesburg, surrounded by his family. He died of pancreatic cancer.