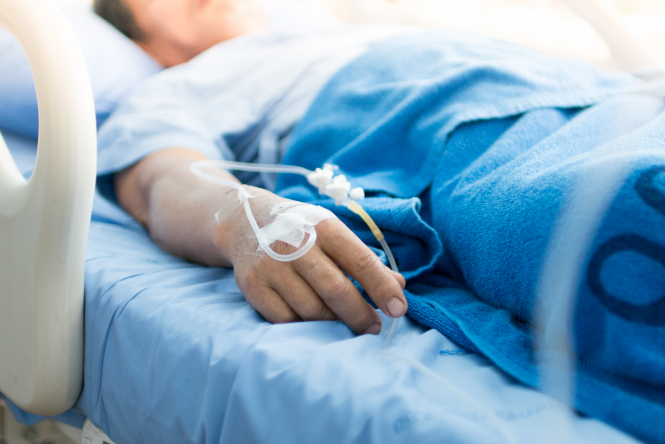 Hospital beds in France are under mounting pressure, authorities and new figures suggest, as a lack of staff and reduction in bed capacity bites Pic: Thaiview / Shutterstock

A full 20% of hospital beds in France are lying unused because of a lack of staff, an inquiry into French hospital bed numbers has found, as data shows that the country has lost 79,896 beds since 2000.

The ‘flash’ study was led by Professor Jean-François Delfraissy, president of government advisory body le Conseil scientifique, more than a year and a half after Covid put unprecedented pressure on hospital services.

Frédéric Valletoux, chairman of the board of the Conseil de direction de la Fédération hospitalière de France and mayor of Fontainebleau told BFMTV: “It's worse now than it has ever been.

“We see these figures everywhere; it’s a problem of attracting and retaining workers, with the uncertainty linked to the epidemic at a time when our health system is in deep crisis.”

In response to the study and the alert raised by le Conseil, the health minister received a group of medical directors at the ministry in a bid to find solutions.

Health Minister Olivier Véran has said that the situation is “worrying” and “complicated”, but there is no need for a “global alert”.

This has been met with derision from the Inter-Urgences group, who published a press release in response, entitled: “The situation is complicated: Are you joking?”.

Commenting on the current situation, a nurse at the CHU Rennes told HuffPost: “Patients are in danger. It’s not possible to manage all these patients with fewer beds and less staff.”

Michèle Leflon, president of the national committee of local and maternity hospitals, said: “We are risking catastrophe.” She said that delays in responding to emergency calls would “certainly damage health”.

Gérard Raymond, president of the France Assos Santé association, told RMC: "The human side of care will worsen because we're going to do things too quickly and less well.”

Hospital admission depends on many factors

Admission to hospital depends on several factors, including the health of the patient, whether they can be safely moved, and the availability of beds in local hospitals.

If one centre is closed for the night, then a patient will be taken to another facility; but this depends on location and availability of beds and ambulances.

Ms Leflon said: “What about for those who are too far and who can’t be moved further? Do we just let them die? These are avoidable deaths, that we are not going to avoid.”

Even patients who are taken to hospital may not stay there, depending on their condition.

Patients are ‘triaged’ upon arrival due to pressure on beds, the workers say. In some cases, this may lead to patients being sent home when they could otherwise have benefited from a bed.

Fabien Paris, a nurse and member of the Collectif Inter Urgences, told the HuffPost: “We will keep those who are in a worse state, and tell the others to go home or call 15. Admission is now not guaranteed. These are decisions that can lead to dramatic situations.”

And even patients who are admitted to hospital may wait hours to be seen and treated by a doctor, and later may wait hours for a bed if one is deemed necessary.

Yet, Autonomy Minister Brigitte Bourguignon last week told the Senate that “there is no triage” happening for truly urgent services.

Why the 20-year drop in bed numbers in France?

It comes as additional data from the national statistical research centre Drees found that the country has lost almost 80,000 beds in 20 years – equivalent to 25% of the sector’s capacity.

We summarise an analysis of the figures by FranceInfo.

1. A drop in beds across the entire country

All departments have been affected by a drop in hospital beds, except Val-de-Marne.

Some departments have even seen their capacity halve since 2000. These include Alpes-de-Haute-Provence, Creuse, and Sarthe, (a drop of 44%, 45% and 48% respectively).

Drees has suggested several reasons for this sharp drop in beds.

The first is linked to the transfer of many beds in long-term care facilities to elderly care homes. The latter number of beds is not counted in the figures. Yet, this only accounts for 15% of the ‘missing’ beds.

The other reason suggested is what is called the ‘ambulance shift’ effect – meaning the shift from a hospital-centred system to greater use of general practitioners and home hospitalisation.

This shift has reduced the number of beds needed in hospitals.

Dr Rachel Bocher, president of hospital practitioners union the INPH, told FranceInfo that overall, “this shift is a good thing, but public hospitals must also be able to cope with periods of crisis, as we saw with Covid”.

Lack of hospital personnel has also been a factor.

Dr Bocher said that the sector is suffering from “a lack of attractiveness for the profession, due to the rate of remuneration and long working hours that put off many young people".

He said: "In the private sector, I could triple my salary, working half as many nights per month.”

Dr Cibien said that the drop in the number of beds would have direct consequences for the quality of patient care.

He said: “[There is] a risk of care and treatment being delayed for up to six months or even a year."

He also said that some practices to manage the issue could prove counter-productive. He explained: “If a patient goes home early because of a lack of beds, and then has to return in an emergency a few days later, this generates additional transport costs.”

Investment good but not enough

In July 2020, the government announced a €6billion investment in the healthcare sector.

Both Dr Bocher and Dr Cibien told FranceInfo that this was a step in the right direction, but that more was needed to fix the issue.

They said that in the short term, the situation was very worrying, as it can take years to train hospital personnel and healthcare staff.

What should I do in a medical emergency in France?