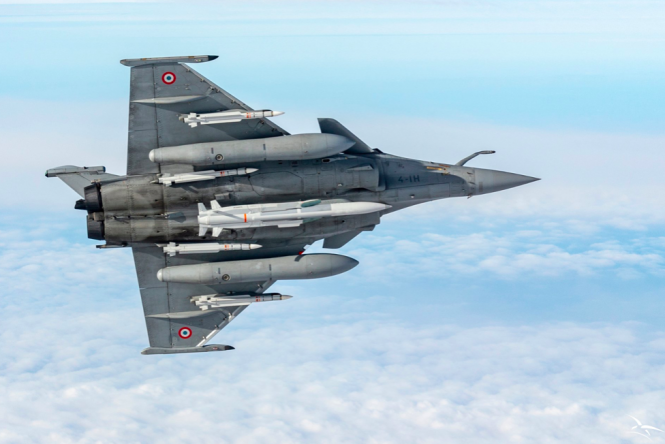 France is testing its nuclear deterrent force today meaning that dozens of planes will be flying across the skies.

The operation – called Poker – is normally undertaken at night four times a year.

However as commercial flights are currently reduced due to the health pandemic, the armed forces have decided, exceptionally, to run it this afternoon.

Air bases across France are mobilised for take-off as 50 army planes, including Rafales, WC-135s and A330 MRTTs, AWACS E-3s, and Mirage 2000s, come together to form a fleet in northern Brittany.

From there they will fly down the west coast towards the Pyrenees before crossing to the Mediterranean coast.

They will then fly into central France, where they will drop down to low altitudes and will simulate deploying a nuclear weapon.

The total flying time will be six to seven hours.

France 3 reports that the exercise will involve some planes role-playing as enemies while other 'French' planes attack a simulated enemy territory in the Massif Central.

There will also be ground-to-air defence systems in place that will simulate an attempt to stop the raid into the 'enemy territory'.

Nuclear deterrent forces are deployed in instances where a country believes it may be under threat of a nuclear attack.

They are intended to deter the attacking country through a show of the force that could be mobilised against them, if they were to deploy a nuclear weapon.

Colonel Olivier, manager of Operation Poker, told La Montagne, it was part of a strategy of “deterrence”.

“Our aerial force shows that we are prepared, and growing in strength,” he said. “That is a visible and dissuasive factor.”

Operation Poker not a bluff

Even if the operation is partly for show, Colonel Olivier said it is also a real training exercise that means the armed forces will be ready if faced with real threats.

He said: “It’s called Operation Poker but we’re not bluffing. It trains us on the offensive and defensive. Any adversary should not doubt our determination and our competence.

“We are preparing for high intensity conflicts, against forces that are equivalent to our own.”

Still, some adjustments will be made for today’s operation.

Instead of carrying real nuclear weapons, models of the same size and shape will be used low-altitude flying will take place over the Massif Central as, the Colonel said: “We targeted less populated zones to limit noise disturbance.”

23 hours ago
5
France reopens to UK tourists: Rules for adults and children