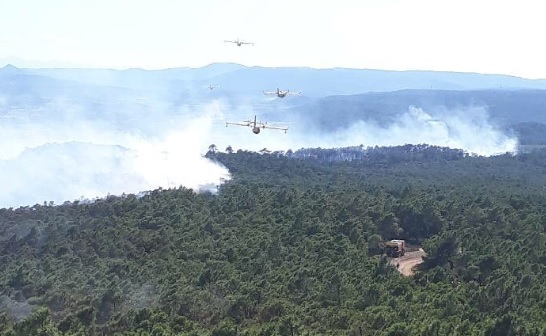 Wildfires broke out this week in the Aude, Pyrénées-Orientales and Hérault departments, and were spread by strong winds of up to 70 kph.

The Corbières region in the Aude suffered the worst damage, with 300 hectares burned; while 50 hectares were destroyed in the Hérault.

Roads were closed as firefighters sought to contain the incidents. Water planes were mobilised to help dampen the flames, with the exact starting points of the fires not yet clear.

In a statement, referring to the Pyrénées-Orientales fire alone, local firefighters said: “In total, no fewer than 11 fire starting points have been recorded."

More than 2,500 holidaymakers at campsites near Argelès-sur-Mer (Pyrénées-Orientales) were evacuated on Monday night (July 15), and given shelter in local sports halls. Another campsite - in the Aude - confined its campers to the limits of its land for their own safety.

No-one was injured due to the flames, authorities have confirmed. The evacuated campers have now been informed - via a special app - that they may return to their site, as the fires are no longer judged to be a danger.

One staff member from campsite Le Dauphin, which has capacity for more than 1,000 people, said: “All of the clients were evacuated, and they are all safe in areas determined by the firefighters. We have suffered no material or physical damage.”

The fires are now under control, but firefighters in the Aude said the blaze there was “contained but still active”.

A team of 300 firefighters were still working at the scene last night, it was reported.

Meanwhile, residents are advised to avoid “roads and fields” in the affected areas, especially the region around 30 km north of Montpellier.