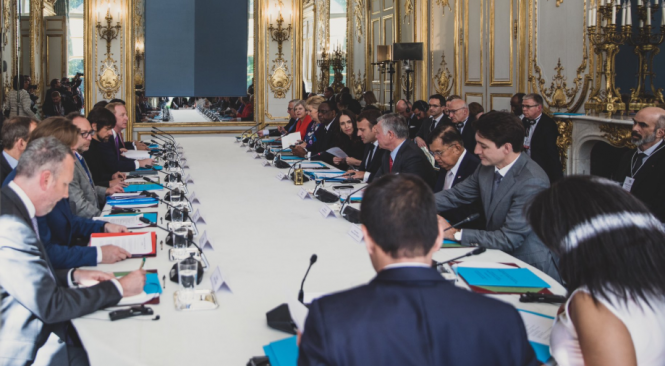 Two months after the deadly attacks on mosques in Christchurch, New Zealand, the two leaders launched the 'Christchurch call' at the Elysée Palace, an international appeal to eliminate terrorist and violent extremist content on social media and end online radicalisation.

The Christchurch Call appeal was launched to coincide with the second “Tech for Good” meeting of G7 digital ministers, which is chaired by France. The summit is the focal point for a series of conferences, seminars, meetings and events linked to technology and how it can be used to benefit society.

"The objective [of the Christchurch Call appeal] is to establish areas of work for the future, particularly in terms of "responsiveness to incidents" and "collaboration" between the various actors, platforms, States and civil society, the Elysée said in a statement.

The Christchurch atrocity was livestreamed on Facebook. Some 1.5 million copies of the video were taken down in the first 24 hours after the attack, before it was removed from the social media network.

"Youtube recorded one upload per second on their platform within that first 24-hour period" after the attack, Ms Ardern said.

She called the meeting a "first step" to "stop social media being perverted as a tool for terrorists and preserving it instead as a means for individuals and communities to connect".

Mr Macron said commitments at the meeting "are part of continuing exchanges between the private sector and heads of state or government".

He added: “What happened in Christchurch wasn’t just a terrorist attack. It was the transformation of the internet into a crazy propaganda machine favouring division and war.”

In a joint statement, Facebook, Amazon, Microsoft, Google, and Twitter, called the attacks in Christchurch "a horrifying tragedy".

"It is right that we come together, resolute in our commitment to ensure we are doing all we can to fight the hatred and extremism that lead to terrorist violence," the companies said.