You need do nothing to be a silver fox 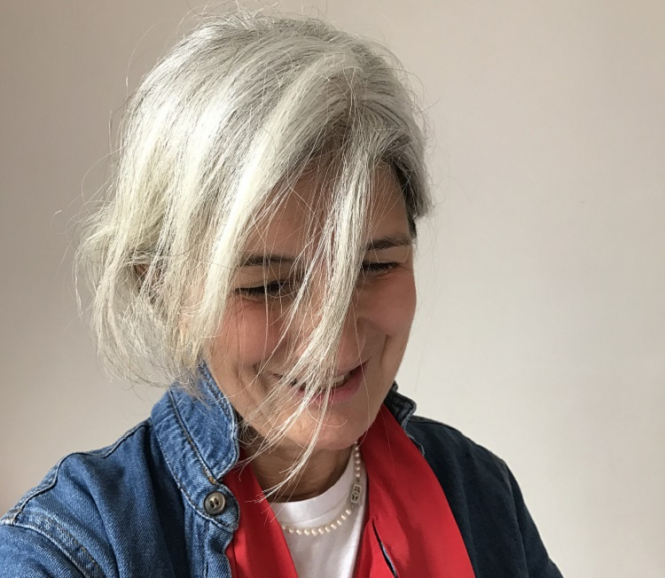 Sophie Fontanel started dyeing her hair at 27 after having had a white streak since she was 15 but has now let nature take over – and won praise from women all over France for daring to take the plunge.

She said she started to notice  more and more women and men with silver hair and then, just after losing a job at Elle, saw a woman in Saint-Tropez turn heads with her “alabaster” hair.

She asked her how she did it and was told “It’s very simple, do nothing.”

The die was cast and she was determined to do it for herself.

As she let the dyed hair grow out she documented the new “me” on Instagram with regular photos, going from ‘zebra’ to what she now calls blande (a combination of blanche for white and blonde) and found that silver hair was not “dead, dull and difficult to maintain”.

She wrote about it in a book Une Apparition and it took off.

Limoges Connexion reader Lisa Bishop has a similar story – minus the big-money book deal – and said that she decided in summer last year to go naturelle and go grey gracefully despite friends telling her she was mad. “I was only 55 and they said I would look old before my time. I was told I was bonkers. It did not sway me.

“I binned the dye and vowed not to use the dreaded stuff again. I also decided to do a monthly blog on a Facebook page I was a member of, Ladies in France Together (LIFT), so women all over France could follow my journey.

“Each month I posted an updated picture of my hair colour growing out with a bit of text on how it was going.

“I had over 250 women following my journey and many decided to also bin the dye and go grey gracefully, grey being the new black.”

Lisa says she is now a full  member of the “silver fox club” and says her hair is “fully resplendent” with the dyed colour grown out.

She added: “I do not for a moment regret my decision and only wish I had done it earlier.”

And she did manage her own money deal as she put aside the cash she saved not buying boxes of dye and found that she had amassed €160!

11 hours ago
5
What are the new Covid rules in France from tomorrow?