Gilets Jaunes to step up protests on anniversary 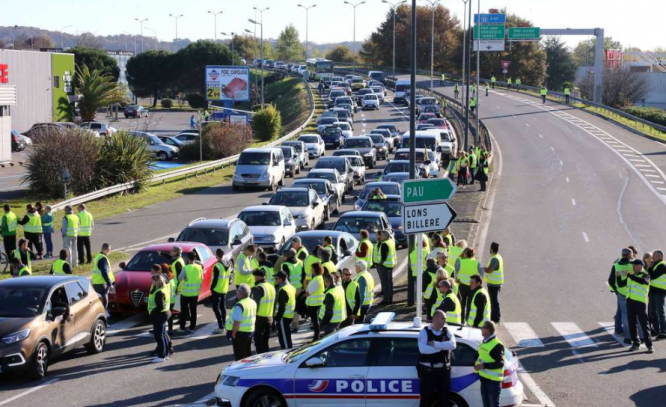 The gilets jaunes are planning step up their nationwide demonstrations this weekend to mark the first anniversary of the grassroots movement.

More than 200 appeals have been issued on social media, calling on activists to block roundabouts and key junctions and stage demonstrations, almost a year to the day after the first protests on November 17, 2018.

Calls have been posted on Facebook, Twitter, and other online media inviting protesters to again take action on Saturday and Sunday, with declared objectives including 'wearing down the police'.

An estimated 282,000 people took part in the first protest a year ago, but numbers have dwindled in the weeks and months that followed. Police, however, are concerned that the anniversary could see a spike in protests, along with a rise in violence that dogged the movement.

On Friday, 100 protesters blocked the entrance to a chemical plant near Saint-Nazaire in western France before being dispersed by police.

Authorities in Paris have said they are preparing for "several thousand" people to join demonstrations. Eric Drouet, a well-known leader of the movement, has called for a go-slow of drivers on the Paris peripherique.

An opinion poll published this week suggests that while 55% of French people are supportive of or sympathetic to the movement, 63% do not want public protests to resume.

The gilets jaunes' protest is not the only one planned for the coming weeks.

November 16 and 17: "Acte 53" of the gilets jaunes mobilisation. Protests and demonstrations are planned across the country.

November 23: The #NousToutes collective and other organisations including a number of unions have called for a demonstration in the capital in support of women's rights

November 29: Deliberately timed to coincide with 'Black Friday' discounting in shops, a climate march is planned in Paris.

November 30 and December 1: Manif pour tous and other groups are planning marches across the country to protest against extending IVF services to lesbian couples and single mothers.

December 5: A general strike against the government's pension reform plans. SNCF, RATP and Air France staff are among those expected to be involved.

18 hours ago
5
Coronavirus: Daily updates on the situation in France