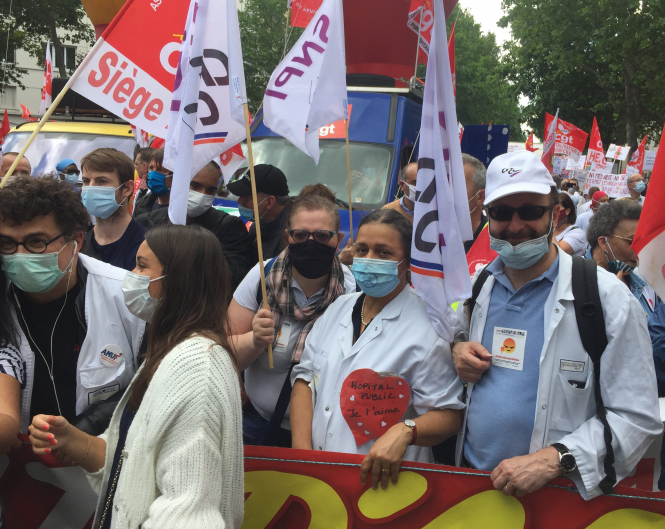 SNPI and other unions at the June 16 health demo in Paris. Photo by @infirmier-SNPI.
By Connexion Journalist

Embittered nurses, doctors and care staff marched alongside retired people’s groups in nationwide protests calling for an end to budget cuts and the start of properly funded care – instead of offers of Covid medals and one-off bonuses. Protesters voiced the same theme: We don’t want medals, we want better pay, a restart to employing staff, better conditions, and a better health service, with no more hospital bed closures. Prime Minister Edouard Philippe said he understood their demands and promised “a massive and significant response”.

The protest came during the government’s Ségur de la Santé consultations to meet President Macron’s call for “massive investment and upgrading” to recognise health workers and amid confusion and anger at reward initiatives. Some staff have mocked plans to give them a medal to mark their service.

Surgical nurse Laetitia Loyacono told Le Dauphiné newspaper at the protest in Annecy she was “proud of our work but I don’t want a medal. I’m a nurse, not a hero, and just want to work properly”. Plans to pay a bonus were mired in uncertainty. Nothing arrived in May’s pay, with confusion over who gets what – whether €1,500, €1,000 or €500. Health staff in the hardest-hit virus regions get €1,500, whether they work in the state or private sector – including in Ehpad care homes, where some private firms are topping up lesser payments.

Health workers in 61 departments get €500, but some staff in 117 hospitals will be paid €1,500 – and no more than 40% of staff can get the full amount. The one-off bonus was due to be paid in June but nursing union SNPI CFE-CGC said: “Hospital staff get €500 but public servants get €1,000. Yet again, hospital staff are the poor relations.”

A historic moment for healthcare professions

Patrick Chamboredon, president of the 700,000-strong Ordre National des Infirmiers, which was originally not invited to the talks, said it was “a historic moment to revalue the nursing profession: skills, pay and career paths. We call for a more effective, more sustainable and more human health system”. Nursing students’ federation FNESI is also taking part in the talks but students are angry, feeling exploited and devalued after being requisitioned massively to replace nurses’ assistants but being paid at only €1.40/hour.

Spokesman Vincent Opitz said: “Students are there to learn, practise and evolve under supervision. But they find themselves practising care and more at risk than others, being the last to receive protection such as masks and gowns – and being asked to wash them at home or in the student laundry.” Although the talks are not due to finish until mid-July, nursing unions complain of a “lack of transparency”. Some, such as self-employed nurses who go into people’s homes, have not been included in the bonuses or the Ségur talks.

Unions say only employed staff have a seat at the talks and 28 unions joined to demand representation. With pay starting at €1,500 and rising to just €2,400, they want new pay scales with better prospects, given their qualifications. The talks may finish by July 14 when the new Bastille Day ceremony for Fête Nationale will be held, where Mr Macron will honour both health workers and the military at
the Place de la Concorde.

Unusually, there will be no Champs-Elysées military parade in Paris, the first time since 1940-44, when the ceremony was held in London in the Occupation. There will be 2,000 participants and 2,500 invited guests for the event, which will include a fly-past.

However, self-employed nurses’ union Onsil said they would, as for Ségur, not be asked. President Antoinette Tranchida said they and the others in the group of 28 would hold alternative events. Meanwhile, a move for workers to give holiday allowance to health staff as thanks for their efforts is in parliamentary limbo. It passed a second reading in the Sénat but may be amended. MPs and senators said it was not well suited. Social affairs committee head Alain Milon said: “This is not what health workers want. They have other needs.”