July's edition of Connexion out this week 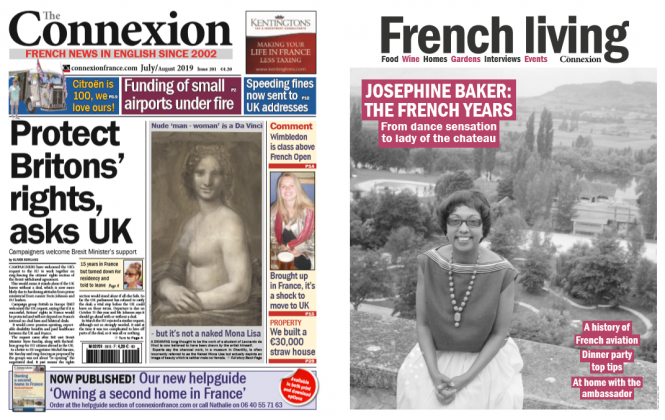 The July edition of Connexion has been delivered to subscribers and will be available in shops from this weekend.

Will driving fines in France follow UK motorists home?
Why some electric cars are not allow to tow
TV licence: Yes you need one if you have a TV
Is cancer care free in France with Ehic or S1
The cost of sworn translations'
Make sense of... quirky French festivals
The evolution of education in France
Support for carers of dementia sufferers
'MoT' test toughens up after gilets jaunes' delay
'Make healthcare card useful for EU travel'

Why electricity prices have soared
Burgundy rules in French architecture's game of stones
Know your cement a lime mixes
Property watch: Limousin/Burgundy
How to lodge a subsistence claim
Sellers must be honest about ongoing issues
'We built off-grid straw house for €30,000'

Ignore French tax laws at your peril
Earnings limit for micro entrepreneurs
Counting tax residency in France in days
France in top five for overseas investment
Understand how French estate planning works
How can I get a client to pay his invoice?

President and PM now have to convince uneasy French nation to follow their lead
Eccentric Wimbledon beats charmless Roland Garros any day
Compulsory speed limiters in cars 'a good way to prevent deaths'
Need a doctor? Improve your local services
Not sure where home is after years of living in France

Citroen's British boss celebrates carmaker's 100th birthday
New lease of life for Riviera movie studios with French Hollywood ambitions
What's On across France this month
Profile: The French life and times of the remarkable Josephine Baker
It's Me, It's Cathy: Red dresses for all at Kate Bush tribute day
Those magnificent French men and women in their flying machines
France's 87-year-old internet godfather
The secrets to a successful dinner party
Top of the glace: Artisan ice cream

+ 10 pages of businesses and tradespeople serving English-speakers in France

To pick up your copy of June's edition of Connexion

Subscribe here and read the edition online immediately (mobile and tablet friendly) + receive a complimentary PDF of the edition. Your print editions will start with the August edition. Subscriptions start at €13.50 for 3 months to a French address