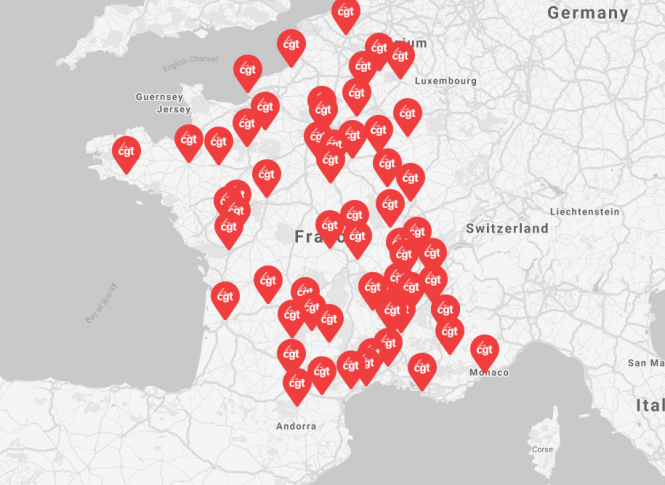 Protesters are taking to the streets in towns and cities across France again on Tuesday, days after hundreds of thousands marched against the government's planned pensions reforms.

Last Thursday, between 800,000 and 1.5million marchers took part in 245 demonstrations across the country.

A look at the CGT union's latest march map for the December 10 protests shows fewer marches have been planned for 'Act Two' of the protests, which comes a day before Prime Minister Edouard Philippe is due to outline further details of the reforms before they are put before MPs.

In Paris, the main march of the day was due to start at 13:30 at Place Denfert-Rochereau in the 14th arrondissement and travel through Avenue de Villars, Boulevard des Invalides, Boulevard du Montparnasse, Place Pablo Picasso and Boulevard Raspail.

Protesters in Lyon were due to gather at Place Jean-Macé, in the 7th arrondissement, at 11:30.

In Nice, the CGT union said the demonstration will start in front of the railway station at 14:00, while the protest in Toulouse will start at Place Intérieure Saint-Cyprien at the same time.

The number of protesters taking part in Tuesday's demonstrations will be keenly anticipated. "Our objective for Tuesday is to do better than December 5, but we will also have to look at the number of demonstration sites, companies on strike or strike rates," the CGT's Fabrice Angéi told the Journal du dimanche.

The number of teachers on strike is lower than on Thursday, when more than 50% of primary school teachers walked out in protest over expected changes to their pensions. Education Minister Jean-Michel Blanquer told France Inter that about 12.5% of primary teachers were striking on Tuesday, rising to 35% in Paris.