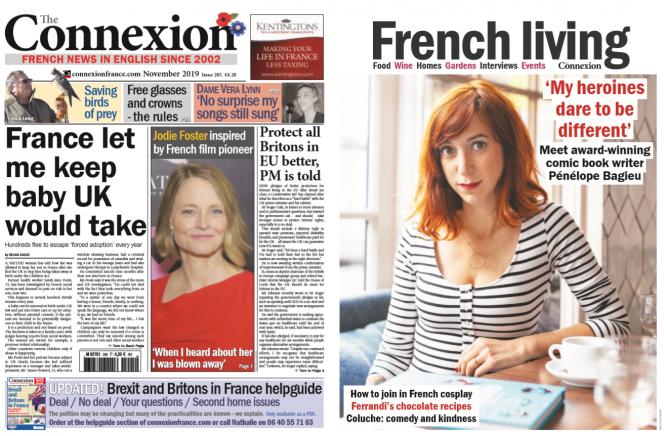 The November edition of Connexion is now on its way to subscribers and is available in shops from this weekend.

France's new no-deal carte website works well ... but what if there IS a Brexit deal?

French barrister in final push to save EU citizenship

Be ready to vote in possible December UK General election

‘My hopes for UK-French relationship after Brexit’

Village in northern France will finally get mains water, a century after post-war promise

Roadside cameras in France can now flush out uninsured vehicles

Arguments for and against hunting in France

Where to get your poppies in time for Armistice Day

Network volunteers step in to help newcomers to France

Yes, foreigners can join French political parties - even if they cannot vote

How to watch British TV in France, legally

Inside the magical world of a self-taught ceramic artist

Can we be charged for drains services we are not connected to in France?

Time running out to safely shut your pool down for winter

I earned €150 a month from renting out my pool

65% reduction in taxe d’habitation this year

Why French love of plastic is fantastic for plumbing DIYers

What we know, don't know and can't know about Brexit and its effects on expats' personal finances

Is business needed to sell a few wooden hobby items?

How is income from UK assets taxed in France?

Crédit Mutuel and Arkéa’s divorce is close to absolute

From defence to art, how Embassy is working to strengthen Franco-British ties

How lacemakers in Calais ended up Down Under

Interview: The man who saved the peregrine falcon in France

‘I have a little idea’ ... five words that began a charity revolution in France

What's on across France in November

Popularity of healthy pulses is racing

Got it taped... the art of retro music recording

How to make the perfect pâté

Mont St Michel: A millennium of miracles ... and tourism

Subscribe here and read the edition online immediately (mobile and tablet friendly) + receive a complimentary PDF of the edition. Your print editions will start with the December edition. Subscriptions start at €13.50 for 3 months to a French address

21 hours ago
5
Coronavirus: Daily updates on the situation in France