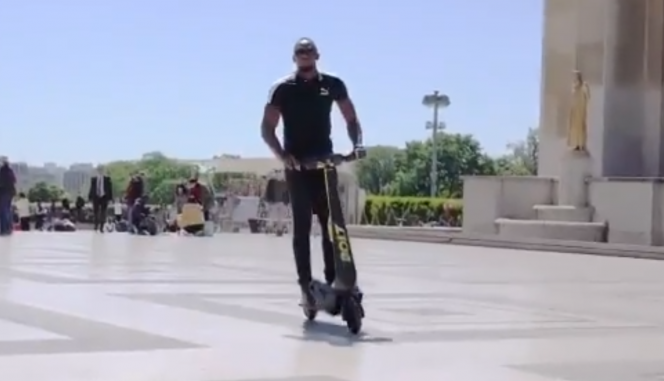 The athlete was in the capital on Wednesday and Thursday to launch his brand Bolt Mobility, which he co-founded, was an already crowded market for scooters, which users pick up and park anywhere in the city via a smartphone app.

But the tribunal de grande instance has ruled that his scooters cannot use the Bolt name, because a rival has already trademarked it, Le Figaro reported. In March, another company, Txfy - which operates VTCs and scooters in Paris - rebranded as Bolt.

Hey @Paris ! I want to meet you! The first 50 people who download my app will receive an invitation to come meet me, the REAL BOLT. On your marks... get set, go! @Bolttherenow ➡️https://t.co/kAaUBcLPxH pic.twitter.com/t12aspKq1r

That company lodged a legal complaint with the court, which ruled in its favour. As a result, Thursday's trumpeted app launch was postponed and 500 branded scooters had to be hastily rebranded 'B - by Usain Bolt'.

The app was expected to be available on Apple and Android operations in France on Friday, while the athlete attended the Vivatech expo in Paris to promote his company - and it's new nano e-car.

Paris is intended to be the launchpad for the Olympic champion's ride-share service in Europe. There are plans in place to offer scooters in 20 European cities by the end of 2020. The company may, however, find itself in a similar situation elsewhere - as the rival Bolt brand already operates in London, Stockholm, Lisbon and Prague and has registered the brand name in 54 markets.
Mr Bolt has not definitively given up on using his name to promote his escooters in France. "We are going to ask that this case, dealt with in summary proceedings, be examined on its merits by the courts," said Didier Louvet, general manager of the company in France. "But it can take a long time."