French parents shield kids from sun more than own skin 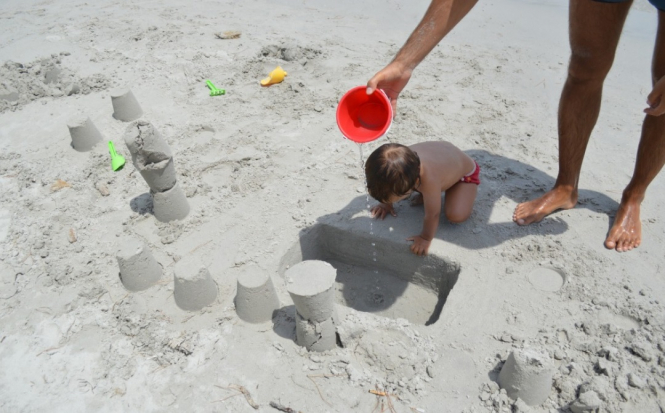 Parents are much better at protecting their kids from the sun than themselves, the new study shows
By Connexion journalist

New cancer study le Baromètre Cancer 2015 from health agency Santé Publique France - published this week - said that most parents are “relatively good” at protecting their children from the sun.

The representative study of 4,000 people showed that 78% of parents with children under four years of age are likely to use recommended methods when it comes to their kids, such as applying sun cream every two hours, avoiding the hottest hours of the day, choosing clothes that cover delicate skin, and giving them a sunhat to wear.

Yet, when it comes to themselves, only 13% of parents would apply the same protection methods to their own skin, the study showed.

For example, only 20% of parents avoid the sun between the hours of midday and 16h, even though 62% say they would not let their children in direct sun during these times.

And over half of parents (54%) said they systematically re-apply sun cream to their children every two hours, but only 15% said they were as careful to do so for themselves.

Almost half (47%) of the population wrongly believed that if sunburn on a child is treated well and heals quickly, then it will not have any consequences later in life.

Similarly, 24% incorrectly said that exposing the skin to artificial UV light before a holiday - for example, by using sunbeds - can help the skin to prepare for the real sun later.

Santé Publique France warned that being sunburned as a child can considerably increase the risk of skin cancer, and added: “Artificial UV rays are equally as carcinogenic [as the sun], and only add to the UV of the sun and strengthen the carcinogenic effect.”