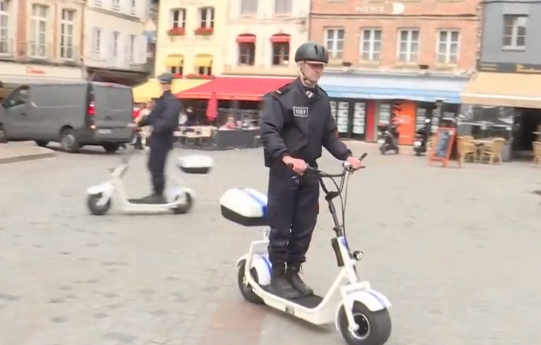 Electric scooters may be controversial for some, but police in northwest France are planning to find out whether they can be useful in the fight against street crime.

In a first for France, a pair of specially designed trottinettes are being tested by officers in Honfleur, Calvados. They have a 30km range and can reach speeds of up to 25kph. It is expected that, in certain circumstances, officers using them will be able to reach incidents more quickly than those on foot, or even in cars.

The scooters, which are based on US Army models used in landing operations, have large tyres that mean officers will be able to ride over bumps and potholes in the road more easily.

If the three-month trial is successful, local authorities will invite scooter companies to bid for the contract to supply police scooters.

In early May, ministers confirmed that electric scooters would be banned from pavements in France, as part of a wider legal project from the minister for the interior and the minister for transport, which will introduce a legal framework for other similar electric vehicles.

From September, users of scooters that can travel at more than 25kph will risk a fine of €135 if they are discovered to be using the pavement without prior permission from the local mayor. Any user going over 25 kph on any road or path will risk a fine of €1,500.
Users will also be banned from wearing headphones while riding, and will be required to ensure that their scooters have working lights, brakes, and a horn.