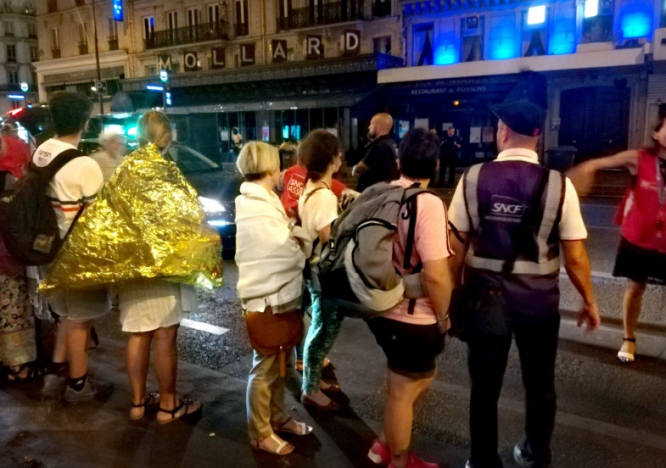 No-one has been reported as seriously injured due to the adverse weather, but severe delays affected SNCF train services last night (Tuesday August 7 to Wednesday August 8) especially on the Paris-Caen-Cherbourg line.

Violent thunder and lightning in the Eure and Seine-Maritime areas especially caused trees to fall and block tracks, resulting in 700 people being stranded in Lisieux, 500 people in Évreux, and 300 in Caen.

SNCF confirmed that fallen trees were to blame for the delay. It said that passenger tickets would also be refunded, and offered food and water to stranded travellers.

After many hours’ delay, some trains finally arrived in Paris at around 2h30, with passengers requiring assistance given taxis to nearby hotels.

In a statement, SNCF said: “We have made sure that two trains left very early this morning, to allow travellers to get to Paris. Normal service is expected by midday.”

Emergency services were also called throughout the night to help people caught due to fallen trees and flash flooding on the roads. Most roads are now said to have been cleared.

Around 700 homes in the Seine-Maritime are without power today due to fallen and damaged cables.

Strong winds, heavy rain and storm conditions were notably seen between Barentin and Rouen, causing dangerous conditions on many main roads, including the A150 motorway.

Emergency services in the region attended hundreds of calls for flooding, parts of roofs ripped off houses, and fallen trees on roads.

Smaller roads were also closed as the pompiers worked to improve access.