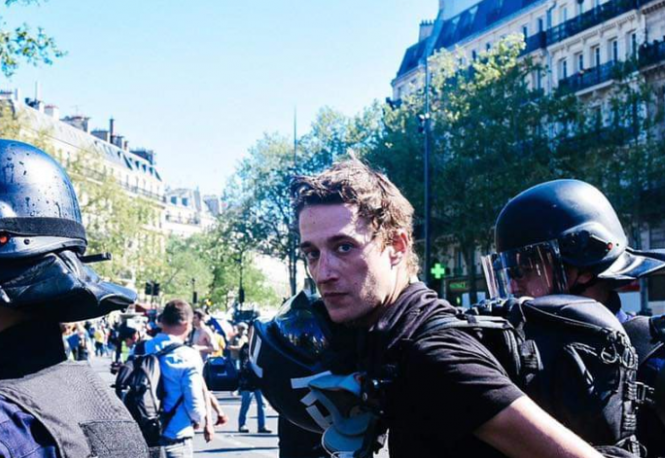 An independent journalist has vowed to continue attending gilets jaunes demonstrations in Paris and said he will also be at the May 1 marches, despite a court ban pending a trial in October.

Gaspard Glanz was arrested at Saturday's gilets jaunes protest in the capital, and will face charges of "contempt of a person holding public authority" when he goes to trial on October 18. Until then, he has been banned from publishing content in Paris on Saturdays and on May 1.

His lawyer immediately announced that he intended to challenge this decision, which "infringes on the freedom of the press and the freedom to work".

Mr Glanz has worked as an independent video journalist for 10 years, covering social movements on the ground - such as the gilets jaunes protests in Paris - for traditional media outlets and, more recently, the Taranis News website that he founded. But he does not hold an official press card - he would, he said on leaving court apply for one.

He said that he, "will go to the demonstration on Saturday and 1 May despite the ban imposed on me".

"If I am caught up in the protest on Saturday, if they want to put me in jail because I am a journalist and I am only filming demonstrators, let them do it," he said.

"With or without permission, I will be there, whatever the consequences, because I am a journalist in France, in a country of freedom."

Mr Glanz has received the backing of journalist union the Syndicat national des journalistes (SNJ) and the Reporters sans frontières association, which both condemned the journalist's treatment by police.

The SNJ's secretary general, Dominique Pradalié, said: "The National Union of Journalists and the profession are outraged. Such repression against journalists has rarely been seen in our country. We are working with dozens of colleagues who have filed complaints of police violence. One journalist had his kneecap broken recently, another his press card confiscated..."

Film of the incident showed that Mr Glanz was arrested after gesticulating angrily at an officer during Saturday's protests. He spent nearly 48 hours in custody before being released following a court hearing at which his trial date was set, Le Monde reported.