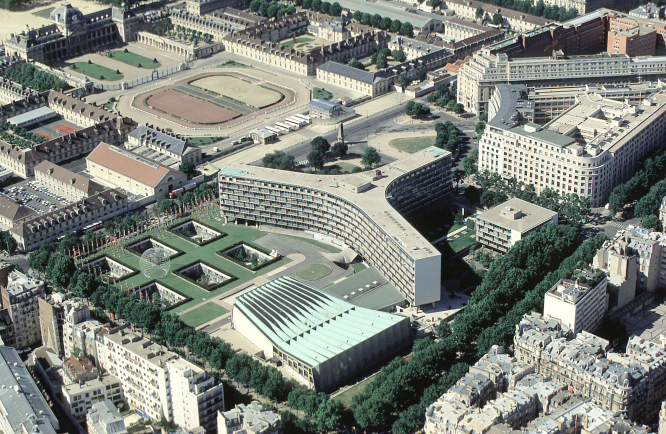 The Unesco building, alongside the cube and the so-called ‘accordeon’ in Paris; European Museum Night is currently the only chance to explore inside
By Samantha David

The distinctive Unesco headquarters at 7 place de Fontenoy in Paris was 60 years old last November. It was commissioned by Unesco (United Nations Educational Scientific and Cultural Organisation) as a symbol of the organisation as well as a home.

The three architects, Bernard Zehrfuss, Marcel Breuer and Pier Luigi Nervi came up with a seven-story building in a three-armed star shape along with a building commonly called the ‘accordion’ and a third building in the shape of a cube. The three pointed star is the most iconic.

The land it is built on still belongs to the French state, which has given Unesco a renewable 99-year lease costing a nominal 1,000 French francs (€152) per year.

The official, laudable, purpose of Unesco (created in 1945) is to “contribute to the building of peace, the eradication of poverty, sustainable development and intercultural dialogue through education, the sciences, culture, communication and information.”

The Paris headquarters is surrounded by beautiful gardens, contains a large international art collection, and hosts free cultural events which are open to the public, although the building is currently closed to sightseeing visits due to security concerns.

One of the best ways to visit the building and see the art collection has been during the Nuit européenne des Musées which will be on May 18 this year, although at the time of going to print Unesco’s participation in 2019 had not been confirmed. It is also possible to visit as a group, if you make the request at least 10 weeks in advance.

There are 44 Unesco heritage sites in France, most of them cultural, but four are natural: the Gulf of Porto off the coast of Corsica; the Lagoons of New Caledonia (in the Pacific Ocean); and the ‘Pitons, Cirques and Remparts of Réunion island’ (in the Indian Ocean); and the Chaîne des Puys-Limagne in Auvergne-Rhône-Alpes. One site is both natural and cultural: the Pyrénées-Mont Perdu.

The cultural sites include specific buildings like the cathedrals in Amiens, Bourges, Chartres and Reims, but others cover entire areas within cities, like the Roman monuments and buildings in Arles, the Port of the Moon in Bordeaux, the historical centre of Avignon, the Santiago de Compostela walking routes in France, the Episcopal City of Albi, Mont-St-Michel and the bay, and the palace and gardens of Versailles.

Getting Unesco heritage status is obviously important. It protects sites for future generations, but also opens the doors to funding, and can increase visitor numbers and therefore revenue generated directly and indirectly. So it is no surprise to discover that there is a long list of sites in France currently up for consideration. Some, like the centre of Rouen, the Camargue, and Mont Blanc, are to be expected. Others like the Brittany village of Carnac (home to more than 10,000 Neolithic standing stones) are less well-known.

Jean-Baptiste Goulard is directing efforts to have Carnac’s menhirs and dolmens heritage listed by Unesco. “It’s a long process because this is France,” he says. “First you have to compile a far-ranging dossier and submit it to the French Ministry of Culture and then another committee decides which dossier to put forward to Unesco each year. Member States can only put one project forward each year, but it’s not a foregone conclusion that Unesco will accept it. The city of Nîmes had their dossier rejected.”

The process can take decades but it is worth it because it literally puts a site on the global tourist map. Brittany is already a tourist destination but currently has no Unesco listed sites. Getting Carnac listed would increase visits from American, Chinese and Japanese visitors because tour operators design trips around Unesco heritage sites. “Visits to the site aren’t profitable economically, but the economic advantage to the area is considerable in terms of visitors also paying for accommodation, entertainment, transport, shopping, and visits to other attractions.”

It is not only about money, however. “Being Unesco listed means there is more money available for maintaining and protecting sites and ensuring people respect them. Unesco status isn’t guaranteed for life, it can be taken away if the site no longer conforms to their requirements of a World Heritage Site.

“In order to ensure the site is correctly maintained, having Unesco status means being inspected annually, and having a formal administrative structure put in place to oversee management, all of which helps ensure that the standing stones will be there for future generations.”