Art restored with a time-travel flourish 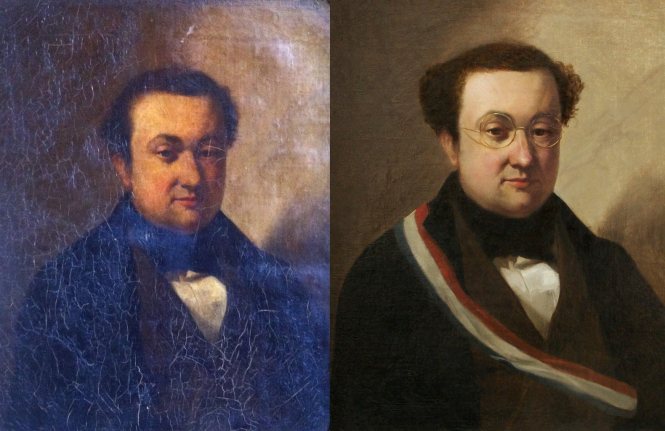 Blase is an artist who calls himself the Hacker-Painter.

He rummages in flea markets, antique shops and auction houses until he falls in love with a damaged canvas, which he then restores by adding his own personal twist to inject a refreshing bit of quirky humour.

Until recently, he rented a gallery in Paris but was forced to leave when the owner sold up. There he used to cause quite a stir in his shop in the Galerie Vivienne, one of the most iconic covered arcades in Paris. Passers-by expected a traditional 19th century painting when they first looked at his shop window but they took a step back when they realised that the sombre oil portrait they had spotted had a small detail which changes everything. A demure girl in lace blouse and long dark hair with a baseball hat, a gentleman in formal clothes bouncing on a big, red, rubber ball, a boy in rags with a pitcher of water and a basket of apples with earphones on, attached to a mobile phone. His most controversial is a recent one of an angel wearing a suicide bomber’s jacket, called Entropy.

He now creates his original pieces in a workshop which is open to visitors and sells on the internet. He has been featured in the Eurostar magazine and says the British in particular like his brand of humour. A smart restaurant in London has shown an interest in showing his work and the designer shop for men’s clothing, Paul Smith has also said they might like to have his paintings in their stores. Something of a surprise for 34 year old Blase who says he doesn’t come from a sophisticated, designer background and is mostly self-taught.

“My parents owned an antique shop in the Auvergne and I grew up surrounded by old furniture and objets d’art. I left school without any qualifications, travelled and worked in a scrap iron yard in Manchester and a restaurant in Ireland. I returned to France where a friend of mine was studying history of art and I became fascinated. I would photocopy his lectures and spend hours reading them.

“Eventually I managed to do a course myself and started buying old paintings from flea markets. I had very little money and so I often bought damaged ones because they were cheap and started restoring them. Little by little I started adding ideas of my own to give an obsolete and destroyed piece of art a second chance by restoring and modernizing it.”

Blase says each painting can take months of work. First he has to scour the flea markets and antique fairs up and down the country to find suitable paintings. Then he works on the restoration and as he is absorbed in the painting he concentrates on finding the small detail which will work and make it just a little bit different.

He tries to keep the additions discreet and enjoys the anachronism that is created by mixing elements from two eras. Digital reproductions of his works on canvas, mounted in a genuine old French frame sell at €1,500 on his website, www.blasepheme.com.

He likes to get a reaction and has a favourite that he has never wanted to sell. He calls it Colucci 1840 and it is a portrait of a man in clothes of the period but he has changed the face so that it is astonishingly like the famous French comic Coluche, who started the charity Restos du Coeur and whose real name was Michel Colucci. “I like to put it amongst other “normal” paintings when I am out and about at antiques fairs and then I wait for the reaction of the passers-by. In one day I can be asked up to 100 times if it is a portrait of Coluche. I pretend to be astonished and people no doubt think I am stupid for not having noticed the resemblance myself.”

Blase enjoys the contact he has with his clients: “I feel they buy because they like the painting and we can have a really good conversation about it. There is no pretentiousness or art snobbery and usually they have a good sense of humour. I have a lot of German and English clients and most buyers are foreign. I don’t see myself as an artist. Just someone who creates an illusion and makes people laugh. At the end of the day, I think that trying to earn a living while making friends laugh is super elegant as a way of life, don’t you? That’s why I carry on.”