Epic sled odyssey for man and his best friend 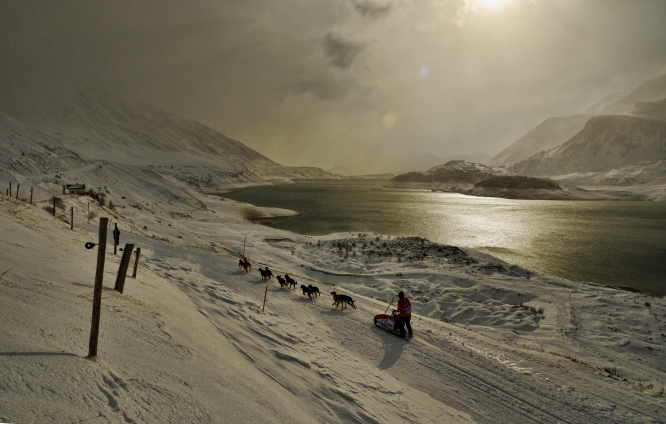 The 13th Grande Odyssée Savoie Mont Blanc gets under way on January 7, 2017. It lasts 11 days and the 670km route features climbs totalling more than 15,000 metres on its way through 22 ski resorts in Savoie and Haute-Savoie.

The event attracts 100,000 spectators every year, and kicks off with a lavish opening ceremony. Crowds throng to the start and finish of each leg and enjoy attractions including mulled wine, giant tartiflettes, campfires, film screenings, walks and snowshoe hikes, themed exhibitions, sled-driving classes, igloo-building, hunters’ workshops and more, giving the whole race a party atmosphere.

For the mushers and their 14-strong dog teams, the race – with its €56,000 prize purse and €15,000 first prize – is altogether a more serious business. It can take years to put together a winning team, and a high level of fitness is needed for the gruelling challenge.

Not everyone is in the race to win, however. Some race just to experience an Alpine wonderland, and for the joy of running their dogs in the one of the hardest races in the world.

The practice of harnessing dogs to a sled dates back at least 4,000 years. But it only became a fully fledged sport in the 20th century. Before then, it was simply a practical form of transport for people living in the Arctic circle.

The sport developed during the gold rush in Canada and Alaska. Gold-diggers used dog teams in the snowy wilderness. Many prospectors found no gold and instead, amused themselves by racing their dog teams.
The first official race, the All-Alaska Sweepstakes – a precursor to the modern Iditarod – took place in 1908 over a 600km course.

The race’s European counterpart, La Grande Odyssée Savoie Mont Blanc (www.grandeodyssee.com) was founded nearly a century later, in 2005, by Henry Kam and his friend Nicolas Vanier, who both love dog-sled racing.
With specialist sled dog vet Dominique Grandjean, they spent three years setting up the first race.
It was an instant success – and they have not looked back since.

“I just wanted to make it the biggest and the best without thinking about it too much. If we think about things too much we don’t do them,” said Mr Kam. “From the outside, that first race was successful – but from the inside, from an organisational perspective, was utter chaos! But it was a success inside and out the following year, and has been ever since.”

Dog-sled racing is an expensive sport and winning teams belong to mushers who have up to 30 dogs.

“It’s not like horse racing,” Mr Kam said. You can’t hire in a jockey at the last moment. Dogs won’t run for a musher they don’t know.”

All the dogs have to pass a health check before the race, and seven vets monitor the animals’ health several times a day during the event.
“The vet team has absolute power to exclude dogs from the race if they have any concerns,” said Mr Kam.

The dogs also have to pass doping checks carried out by the French anti-doping agency.

He described dog-sled racing as ‘extraordinary’. “It’s a hard drug: once you taste it, you can’t stop. It’s a whole life. The relationship with the dogs is a daily, ongoing thing.”

Climate change poses no immediate threat to the race, Mr Kam said, because the route is only confirmed in accordance with weather conditions a few days before each stage.

“Money is a far bigger threat, because it costs around €1million a year to put on the race, so we depend on sponsors. But as long as there are sponsors, snow and mushers, the race will continue!”
He finds La Grande Odyssée Savoie Mont Blanc to be a joy. “I don’t get out of bed wondering what I have to do today. I’m not bored at work.

“I have the luxury of working with people who are passionate about their lives and their sport. I don’t do it for the money, I do it for the sheer joy of it. Isn’t that fantastic?”