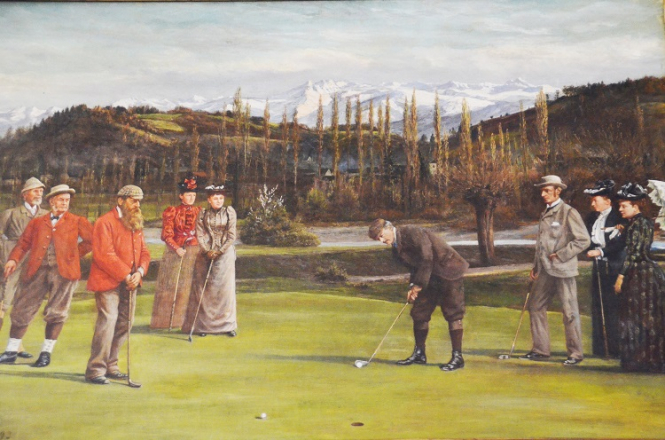 The golf course in Pau is proud to be the oldest-established in continental Europe. Golf was not invented in France, however; it might even have its distant origins in Holland.

People have been playing various games with balls and sticks since the dawn of time. But modern 18-hole golf is generally agreed to have developed in Scotland during the Middle Ages.

Scottish records show that golf was prohibited in 1457 as being a distraction from archery, and in 1592 Edinburgh council declared it should not be played on the Sabbath. The Old Links golf course in Musselburgh is accepted as being the oldest golf course in the world, the story going that Mary Queen of Scots played there in 1567.

So it is no surprise that when two Scottish officers joined Wellington’s army fighting the French in Portugal and Spain, they took their golf clubs along.

In February 1814 their regiment was quartered in Billère near Pau (Pyrénées-Atlantiques) and having time on their hands, they looked for a place to practice their swings. The area was stunningly beautiful and so well-drained that it wasn’t even muddy in the winter.

After some friendly negotiations with the local landowners, they established a rudimentary golf course where they could play their favourite sport.

Of course, they soon moved on, and the golf course was abandoned. But 20 years later they came back with their friends to revisit old haunts. Their passions were riding, hunting, mountaineering and, as always, golf.

All of these could, of course, be enjoyed in the UK, but the climate in Pau was so much better, so why not play in Pau? Increasing numbers of people started visiting the area from the UK, and in 1856, a permanent golf club was established.

At that time, the club catered exclusively to wealthy, leisured, sporting expatriates with money to burn on luxuries including a stagecoach service called “The Rocket” – which boasted that it could complete the journey in under eight hours from the golf club in Pau to the golf club in Biarritz (which opened in 1888). This was reflected in the magnificent Victorian interior of the clubhouse, featuring dark polished panelling and bow windows.

After the First World War, however, membership dropped. Many of the expats in the area had gone back to the UK, the local French population were not that keen on golf and the landowners were not inclined to extend the lease.

It looked like the club would not survive. But finally in 1960, a new lease was signed and the club received a grant to restore the golf course and the clubhouse, retaining all its original character and charm. Electricity was installed, along with central heating and the entire place was refurbished.

As a result, membership surged from just 60 to 350 and the future of the club was assured. Today the club has around 670 members, most of whom are local French people, a bar/restaurant which is open to the public, and a pro-shop as well as the clubhouse, which is a veritable museum of the club’s history.

“We want golf to be seen as a real sport, open to everybody, not just a privileged elite,” says the club’s president Jean-Loup Lacombe. “September 23 is our Journée Nelson Paillou* when we invite the public to visit our club and we offer beginners a taste of the game. We’ll be hosting a group of golf historians, too.”

On September 19 they will also be holding a competition using 19th century gold clubs. “The public are invited to spectate; it is a very different game! We won’t be using 19th century golf balls because no-one makes them any more, and the originals are very fragile and rare. We wouldn’t want to lose or damage them.”

He says golf is a great game for children and teenagers because it teaches respect for your surroundings and for other people. “You have to repair the holes you make in the green, for other players, for example. You must leave no traces.”

The main benefits, however, are psychological. “Golf is primarily a game against yourself, it teaches humility and perseverance. It reveals your true personality, when you play golf with someone the masks fall away, and people’s true characters are revealed. I love the book by Timothy Gallwey, The Inner Game of Golf, it really explains these aspects of the game. Acquiring the physical techniques is reasonably straight forward, but the rest is all played in your head.”