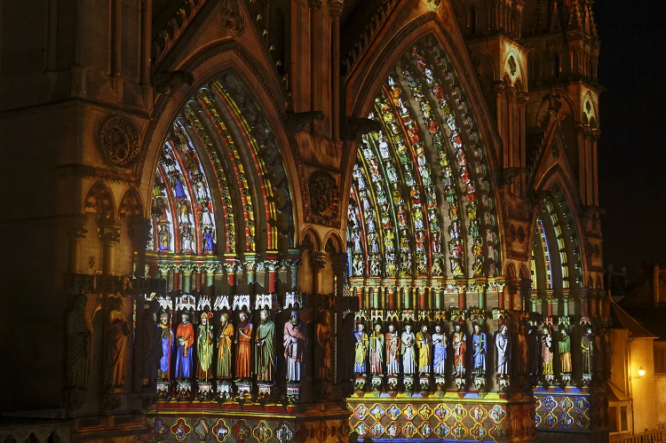 This December the lightshow projected onto the cathedral in Amiens will be more ambitious than ever, in honour of the 800th anniversary of its construction.

The first stone of the Cathedral Basilica of Our Lady of Amiens was laid in 1220 and it was completed in c.1270.

A Unesco World Heritage site since 1981, the cathedral is something of a Tardis inside, stretching 42.3metres up to the sky and encompassing a volume of 200,000 cubic metres.

The cathedral is the seat of the Bishop of Amiens, the capital of Picardie, around 120kms north of Paris.

What makes it stand out, however, was a discovery made during the 1990s. “It was the first large building to be restored using a lazer technique,” says Emilie Messiaen, the Heritage Director in Amiens. “Until then, cleaning was quite brutal. All the pollution was sand blasted off the stone along with all traces of paint. But using the new laser method on the facade, traces of pigments were discovered, and architects realised that it had originally been painted with multiple incredibly bright colours.” Since that time, it has been realised that at that period all large cathedrals were brightly decorated.

“Of course, we decided to restore the colours but in order to preserve the stone, we decided to apply them with light. But it wasn’t just an imaginative creation. Scientists and researchers took samples to ascertain exactly what colours were used and elaborate lighting was designed to project the colours back onto the facade.”

The result is a free, daily, 50-minute son-et-lumière show on the cathedral’s western facade, which really brings the life-sized sculpted figures of kings and saints to life, and this December will be a fantastic opportunity to see it.

The Christmas market, which opened on 23rd November, will stay open until 31st December, featuring around 130 wooden chalets selling gifts and foodstuffs.

Santa wanders the cobbled streets handing out sweets to children, and there is a skating rink along with a full programme of concerts and parades.

The lightshow starts every evening at 7pm, telling the story of the cathedral and also looking at the role of colours, their meaning and the role they play in the cathedral’s history.

However, if you cannot visit Amiens this December, the show will return on 15th June along with new images celebrating the anniversary, and run until the 3rd weekend of September. The show plays at nightfall, meaning the times vary with the dates; the tourist office has all the details.

There will also be other religious and cultural celebrations throughout the year including a full programme of concerts, theatre and other performances in and around the cathedral.

In April 2020 until the end of the year, in the same building as the Tourist Office, there will be an interactive exhibition especially aimed at families with children explaining the history and construction of the cathedral in the form of games; in June 2020, Amiens will host its well-reputed exhibition of comic strips and cartoons; and in September, the Musée de Picardie (art and archaeology) will open an exhibition about the cathedral.

While in Amiens, just a few hundred yards from the cathedral do not miss the little-known ‘hortillonnages’; a series of floating gardens on a 65km network canals. A haven of peace, you can stroll along beside the water or take a boat ride to explore further.

If the weather is bad, however, take the trouble to find Jules Verne’s house, which is now a museum about the author of Around the World in 80 Days.

The spiral staircase winds all the way from the ground floor to the top and the themed rooms reflect his passions for travel, science and adventure.