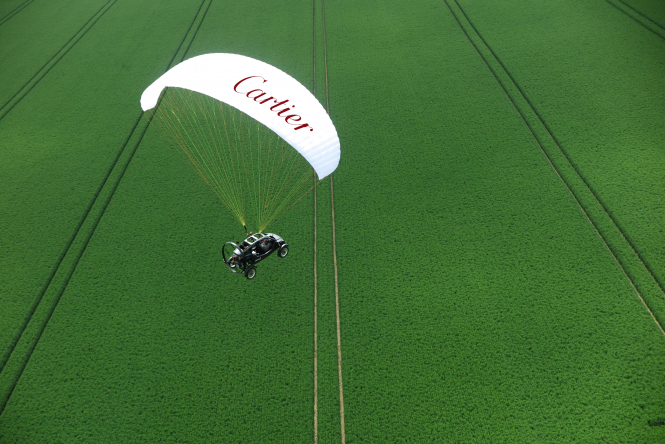 It may sound like science-fiction, or a stunt-man’s dream, but for several years French company Vaylon has been busy taking the fantasy of a flying car into the realm of reality. Their Pégase all-terrain buggy is also a micro-light aircraft, capable of take-off and landing on almost any surface.

Before anyone would take it seriously, the Vaylon Pégase had to complete the symbolic mission that, for more than a century, has been the arbiter of all new airborne prototypes: the Channel crossing. It was this route that French aviator Louis Blériot chose for his solo flight in 1909, risking a fall into freezing waters if he failed. Thus on June 13, Vaylon’s test pilot, Bruno Vezzoli, piloted the Pégase from Calais to Dover, driving the vehicle from Paris to undertake the mission, and to London to complete it. If the white cliffs of Dover had become accustomed to aeroplanes and balloons arriving from France, this was the first time that they had ever witnessed the arrival of a flying car.

Pégase’s maiden channel crossing was sponsored by Cartier, an appropriate choice of sponsor given that, in 1904, Louis Cartier designed the first wristwatch for Brazilian aviator Alberto Santos-Dumont, in order to allow him to check the time whilst operating the controls of one of the airships for which he first soared to international fame. No doubt Santos-Dumont would have been tickled by the idea of his sponsor later backing something as outlandish as a flying car: he himself was known to have sailed his airship number 9 along the roofline of Paris boulevards, sometimes tying it up whilst he popped into a café for lunch.

In a nod to his adventurous predecessor, Bruno Vezzoli’s outlandish journey on 13 June began on the Champs Elysée, at number 154, home to the Cartier boutique. Santos-Dumont used to live at 114 Champs Elysée and landed his “dirigible number 9” there in 1903. From Paris he drove to Calais, where he took off at 8.03am French time. The 35-kilometre channel crossing took about 50 minutes, and for its duration the Pégase was accompanied by a fleet of drones and paramotors. It landed in Dover at 7.53am UK time. It was then driven to the Kensington Design Museum in London.

Pégase’s story has had a fairy-tale quality from the start. “I was inspired by Phileas Fogg,” explains Vaylon’s President Jérôme Dauffy (39): “I wanted to complete a trip around the world in 80 days in a flying car.

“I was entirely serious from the outset, but the problem was convincing other people. They looked at us as if we were barking mad.”

It is testament to Mr Dauffy’s determination to realise his dream that the Channel crossing took place. “The first stage of the 80-day tour of the world is London to Paris,” he explains. “This year we did it the other way round, but the principle is the same.”

The idea of Pégase may have a touch of romance about it, but the reality is a sturdy and high-performing piece of inspired engineering. Capable of speeds of up to 100kph on the ground, it can also travel at up to 80kph in the air. Its range is somewhere between 500 and 1,000 kilometres, up to three times the distance between Paris and London. After a flight of two and a half hours, it can still travel 100 kilometres by road. It is economical on space when it comes to becoming airborne, too, requiring a maximum of 100 metres for take-off and 30 metres for landing.

Initially designed as a vehicle for a single pilot, a second prototype Vaylon gave Phileas Fogg his Jean Passepartout by adding a second seat alongside the first. Mr Dauffy has not yet taken up that seat but he is biding his time: this paramotor pilot is looking forward to the end of the testing phase when he can experience flight in a tandem Pégase first hand.

Apart from rethinking Jules Verne adventures, what will this technology be used for? Far from being envisaged as the plaything of the super-rich—although doubtless it will also be this—its designers hope that the Pégase will be put to practical use. “After a natural disaster, when the roads have become cut off, the Pégase will be able to get through to deliver help where it is needed, as a first responder,” explains Mr Dauffy. Similarly, it could also “facilitate deliveries to remote areas that until now have been virtually unreachable by road”, such as in Gabon and South Africa, where interest in the project has already been shown.

With a successful symbolic test flight across the Channel under its belt, the Pégase should be under construction in about a year’s time, according to Mr Dauffy.