Vélocipédia dandies are still on a roll 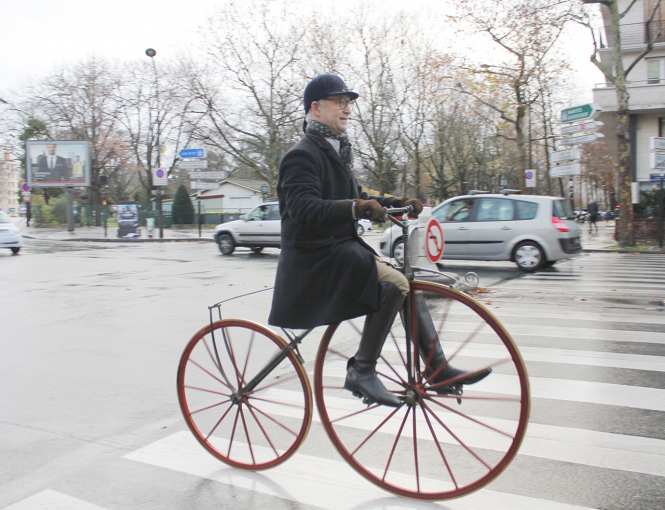 The name ‘vélocipéde’ was probably coined in 1817 by Karl von Drais in French to describe what is now known as a ‘dandy horse’: a seat fixed to a cross bar on a cycle without pedals which the rider moves by pushing their feet against the ground.

But today, the name (from the Latin velox = swift and ped = foot) describes front-runners of the modern bicycle, built mainly from wood with some metal parts, with pedals attached to the front wheel.

These were manufactured from the 1860s before bicycle chains and gears made it possible to make the pedals operate the back wheel. The best known model was the ‘Penny Farthing’, developed to have a massive front wheel so that the machine would move further, and therefore faster, with each turn of the pedals.

By the late 1880s pneumatic tyres had been invented and front wheels had shrunk. Bikes were easier, safer and more comfortable to ride than the old velocipedes and the design made it possible for women as well as men to ride them.

But for a few fans, the lure of the velocipede has never dimmed. Guy Gaudy from the association ParisVélocipédia says the appeal is pure fun. He and a group of other ‘vélocipédistes’ are so keen that in 2015 they decided to celebrate the 150th anniversary of the invention of the velocipede by recreating the velocipede ride from Paris to Avignon – the world’s first cycle race – in 1865.

Twenty-one riders finally assembled, dressed in costume, with their original velocipedes. They came from France, Canada, Belgium, Germany, Japan and the UK, solely for the fun of it.

“It was a bit mad, and a great challenge. 864kms divided into 14 stages. Riding these machines is really hard work, even on modern roads,” says Guy Gaudy. “They weigh 25-30 kilos and have no gears or brakes. It takes twice as much energy to pedal a velocipede as a new bike, the top speed it 15km and the wheels are basically cart wheels so there is a lot of resistance to rolling.”

Wearing vintage clothes was all part of the fun, although Gaudy says they did not wear them for the whole ride. “We did the majority of it in sports clothes, and just wore costumes for the departure and the arrival.”

All the velocipedes they ride are original models, rather than modern reconstructions. “Some of the very old models are too fragile to use, but most of our machines date from the 1870s so they are quite solid.”

He explains that riders came from all sorts of different groups and associations including the International Veteran Cycle Association. “No-one thought we’d actually do it, but we did and that has given rise to all sorts of other ideas.”

The only disagreeable part of the process is doing the paperwork, he says. “Sorting logistics, obtaining permissions, booking accommodation, catering, authorisations, arranging the departure and the arrival, etc. But it has to be done and the results are worth it. We work with local mairies, explaining our plan, saying we’ll be passing through their communes..”

In April 2018 they held a parade of dandy horses in the Jardin de Luxembourg in Paris, and in May they held an all-day event in Paris starting with a parade in the Jardin du Pré Catelan, taking in a ride through the city before holding races and then a grand dinner to round off the day.

In 2019 they are planning to ride from Paris to Rouen and anyone who loves old cycles is welcome to join in. (See velocipedistes.com for information.)

The association already includes an English rider. “All that’s required is passion. It’s just the joy of recreating these iconic old races, stepping up the challenge!”