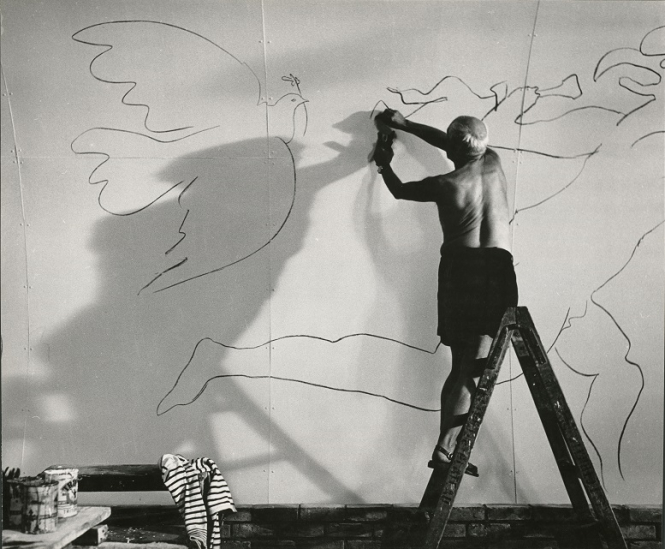 Included in the exhibition is a photograph of Pablo Picasso at work in his studio, drawing doves for his ‘Temple of Peace’ at Château de Vallauris in 1953
By Samantha David

Catch it while it lasts, because the Picasso exhibition at the Musée des Beaux-Arts (aka ‘Le MUba Eugène Leroy’) in Tourcoing (just outside Lille) which opened on October 19, only runs until January 13. Getting there is easy as Ouigo trains to Lille actually terminate at Tourcoing.

Rather than the usual collections focussing on Picasso’s portraits, or his war paintings or his blue period, this exhibition looks at his work as an illustrator and includes 200 works as well as a guide especially for children, making it an ideal introduction to Picasso’s work for all the family.

“We wanted to look at a lesser known aspect of one of the 20th century’s major artists,” says co-director Christelle Manfredi. “People don’t necessarily connect him with illustrating, but it is a thread that runs through his life story, illustrating his friendships and relationships with writers. He had a real interest in text, in theatre, in all sorts of other art forms, and creativity in general. His book illustrations demonstrate his evolution as a person, as well as an artist.”

Over his lifetime, Picasso illustrated five books, the first in 1905, the last in 1973.

He used a wide variety of techniques in his illustrations, which often move the text along, complete it, extend it, even sometimes overtake it, adding a whole new dimension.

The works displayed are small scale compared to some of Picasso’s more famous works like Guernica which measures 3.49m x 7.77m. “Some of his illustrations are very minimal, and others are more complex with lots of movement and strength. It makes this a very intimate show.”

The museum has made big efforts to be as accessible as possible to people with sight-impairments, restricted mobility etc.

It is arranged in rough chronological order, around the books he illustrated, but focussing on other periods too.

The classically-inspired drawings he made from 1915 to 1924 are especially interesting, being a far cry in stylistic terms from his more well-known works.

The museum offers a range of guided tours, open evenings and workshops for all ages as well as special activities.

“We try to be an ‘école de regard’; we teach people how to see art, how to look at it. We try to teach them to notice hidden motifs and messages, for example.

“We receive a lot of schools groups and doing workshops with them makes exhibitions more interactive, interesting and personal. Workshops are run by mediators and artists with both theoretical and practical knowledge, who explain but also encourage people to have a go. We also work with community centres where people write texts and we help them lay them out on the page with illustrations.”

All materials are supplied for adult workshops where people can experiment with techniques including lino printing, sketching, and watercolours.

It is best to reserve in advance for adult workshops as they are limited to 12 people.

Around 30-40,000 people a year visit ‘Le MUba Eugène Leroy’ and up to 30,000 people are expected to visit the Picasso exhibition, meaning it is best to buy tickets online, not only in order to ensure entrance, but to skip the line.

And while you are in the Lille area, why not visit the city’s three other major art museums; the LaM (Lille Métropole Musée d’Art Moderne, the pba (Palais des Beaux-Arts de Lille) and the fascinating ‘La Piscine’ (Musée d’Art et d’Industrie André Diligent de Roubaix).