The fine art of weaving a Tolkien tale 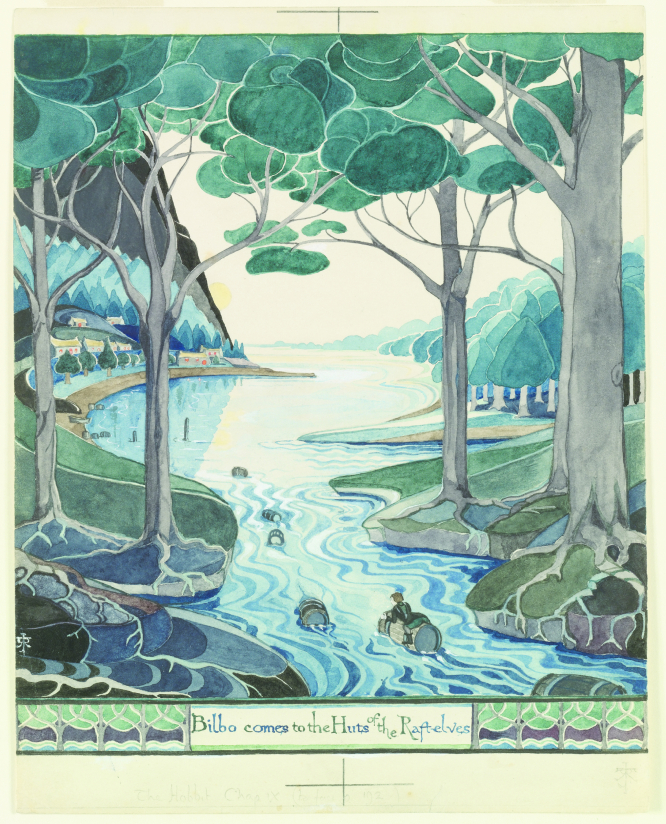 Detail of the pattern from Bilbo comes to the Huts of the Raft-Elves (1937), set to become a huge tapestry.
By Samantha David

Bilbo and friends are to be immortalised in thirteen specially commissioned Aubusson tapestries and a carpet. The work will take four years and the designs will be closely based on the original graphics by Tolkien himself.

He was an accomplished artist, who learned to paint and draw as a child and continued to do so all his life.

The designs were selected by the Tolkien Estate in partnership with the Cité Internationale de la Tapisserie but will not only include illustrations for The Lord of the Rings and The Hobbit but also Christmas drawings that he did for his children.

The ‘Numenorean’ carpet will be immense, covering 130 square metres, but no images are available for it yet as it will be the last work to be completed. The first stage in the project is making up patterns for the tapestry-workers to follow.

The origins of tapestry-making are shrouded in mystery, with mentions of the craft going back to 732. What is certain, however, is that tapestries have been made in Aubusson, Creuse, since the 15th century and that Aubusson tapestry was added to the Unesco world heritage list in 2009.

The earliest tapestries are called ‘verdures’ – made using plant-based dyes, they feature exotic or fantastic animals and birds, often set in forest scenery with stylised backgrounds of leaves and greenery.

Later on, religious scenes were more commonplace: the lives of the saints, scenes from the Old Testament, and sometimes historical scenes too.

In the 17th and 18th centuries, tapestries were made from paintings and the subjects remained centred around classical literature and hunting.

During the 19th and 20th centuries, tapestry as an art form fell into something of the doldrums. Tapestries seemed old fashioned and the designs tended to be more of the same.

Many tapestry makers simply went out of business. But Aubusson looked for new artists, new subjects, new techniques and managed to survive.

To recognise an Aubusson tapestry, first look for the signature M.R. Daubusson on a blue background, often followed by the initials of the workshop and ‘pour Felletin’. Only eight tapestries are ever made from any given design.

John Ronald Reuel Tolkien (1892-1973) was an English academic, professor and writer who created an entire fantasy universe. His work encompasses tales, poems, invented languages, and fictional histories. As such, his work echoes the original fantasies depicted in Aubusson tapestries, making his Lord of the Rings and Hobbit books excellent subject matter.

The Aubusson Tolkien tapestries are set to be completed in 2021.