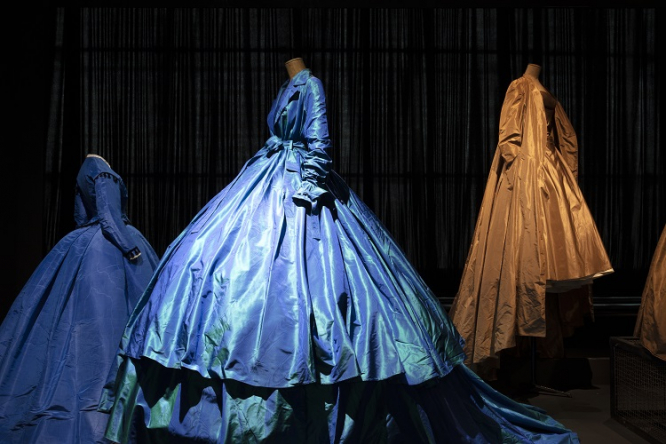 Some of the stunning dresses on display at the temporary Calais exhibition, which also features a look at lace making techniques
By Connexion journalist

A fascinating fashion exhibition is open in Calais this autumn at the Cité de la Dentelle et de la Mode; catch it before it closes on January 5th, 2020.

To celebrate the museum’s 10th birthday, ‘Olivier Theyskens, In Praesentia’ includes many examples of the Belgian designers creations. (His gowns have been worn by stars including Nicole Kidman, Cate Blanchett, Reese Witherspoon, Emma Watson and Kirsten Dunst).

The museum celebrates the history of machine-made lace in Calais and the nearby town of Caudry, which are the two centres of lace-making in France.

Chantilly, whose name is closely associated with lace in many people’s minds, produced hand-made lace many centuries ago, but has no modern lace production. Since the 19th century lace has almost exclusively been machine-made. Today, ‘Chantilly’ describes a style of lace, rather than its place of origin.

Calais became a lace-making centre when in 1816 lace-makers from Nottingham smuggled lace-making machines across the Channel and set up shop in what was then a small town called St-Pierre with 3,000 inhabitants.

As the crossing to Dover became more established, and increasing numbers of passengers passed through Calais, the city developed into not just an extensive port, but also a thriving centre of the lace industry. By 1885, St- Pierre had become part of Calais with a population of 33,000 people.

One of the most popular exhibits in the Calais museum is a monumental, ear-splitting machine made in cast iron which dates back to 1907 and which can be seen working in the museum.

The machine operators cannot use oil to lubricate the working parts for fear of spoiling the lace, so graphite powder is used. It does also stain the lace, but unlike oil it can be removed without damaging it.

Originally, it took months to make patterns for lace on perforated cards, but today it can be done in a week using a computer.

The ‘Olivier Theyskens, In Praesentia’ exhibition is designed to reflect a series of links between the museum’s permanent collection of lacework and Olivier Theyskens’ designs. “I had worked with Olivier on a previous exhibition,” says Lydia Kamitsis, the exhibition’s curator. “So he was the obvious choice for an exhibition illustrating the links between the role of a designer and the role of a museum. I knew his career path, his creative development. He has a very strong technical relationship with the past in the sense that he can make patterns, he can cut, embroider, he understands bias, and knows how fabric drapes on the body. He has a fluid, instinctive relationship with the past although his designs are very modern.”

The exhibition is in the form of twenty different scenes, each one with a different theme, designed to illustrate an aspect of the designers’ work and of the links between his gowns and those owned by the museum. “When we were going through our store rooms, he found two gowns – one blue, one sienna – both crinoline-style dresses from the 19th century, and immediately saw their resemblance to two frocks that he had designed in the past without ever having seen these vintage creations. It was uncanny.”

The exhibition traces these links. “The past isn’t dead and gone, it’s a living thing which informs the present.”

Public reaction to the exhibition has been very positive because it is so spectacular, and fascinates even people who are not normally interested in fashion.

It runs until January 5 2020 (closed on Tuesdays). Tickets for ‘Olivier Theyskens, In Praesentia’ cost just €4;