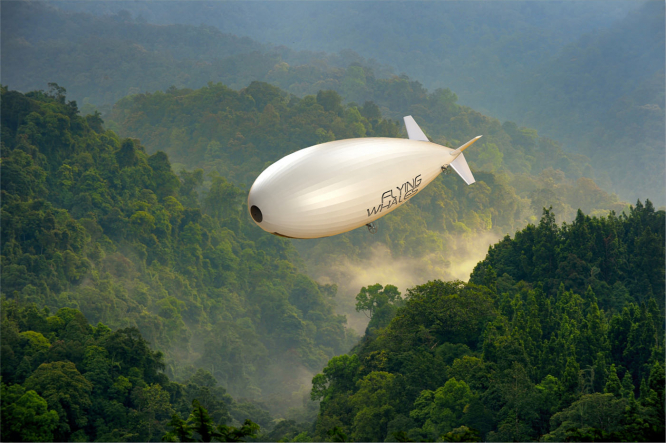 If you live in Nouvelle Aquitaine, it could be worth keeping an eye on the sky for a so-called Flying Whale, one of the many destined to be built in the area by new French company called – wait for it – Flying Whales! The news is even more exciting if you are passionate about aviation because the company is recruiting.

The company, based in Suresnes near Paris, was founded in 2012 by CEO Sébastien Bougon in response to the problem facing the French Forestry Office (ONF): France has some of the largest managed forests in Europe but imports more timber than it exports because transporting felled trees out of remote forests is so problematic.

Read more: why taking extra care is needed when walking in forests post-lockdown

An engineer by trade, Sébastien Bougon, came up with a novel answer, explains the firm’s Marketing Director Michèle Renaud. “We are developing the LCA60T (ie. the Large Capacity Airship, 60 Tons); a 150 metre-long, 42 metre-high, rigid-frame airship which will be able to carry up to 60 tons of cargo (ie. timber and machinery) in and out of forested areas.

The hold will be 70 metres long, meaning it will also be able to transport items such as electricity pylons, and wind turbine components. “It means timber can be harvested anywhere without the construction of roads. There won’t even be any need for a landing strip as the airship will be able to load and unload whilst hovering just above the ground. “It will be filled with helium, which is non-flammable and lighter than air and, although initially the airships will be powered by aviation fuel, we plan to change to electric engines as soon as this becomes technically possible.”

The company is not planning to confine their operations to France and are targeting markets worldwide. They plan to manufacture in Quebec and China as well as in Nouvelle Aquitaine in France. “Obviously the airships made in Canada will be used in North and South America, those produced in China will be used across Asia and the French made ones will be used in Europe and Africa,” explains Michèle Renaud.

“Apart from transporting timber, the airships could be used to access remote outposts because they can easily travel over all kinds of hostile terrain including frozen water, snow, and mountains, carrying all kinds of construction equipment and materials.”

Nouvelle Aquitaine was chosen because the region was able to propose a site with good transport links and access to uncluttered airspace in which to test the airships. The exact location has not been revealed yet, but wherever it is can expect an economic boost from a company creating up to 200 new jobs. Financially backed by large investors including BpiFrance, ADP, Bouygues and Air Liquide, Flying Whales plan to produce 150 airships worldwide during the first ten years. “And then we will manage and operate them. It takes a lot of training to fly an airship, so we plan to use our own pilots. The timetable is to produce the first one in France in 2022, make the first flight in 2023, and see it enter commercial service in 2024.”

It might seem like a slow process, but before entering service, the airship will have to pass the EU’s strict aviation certifications as well as security tests like all other commercial aircraft in Europe. Flying Whales is recruiting aero-nautical engineers as well as other profiles. “We are expanding rapidly, and need more staff,” says Michèle Renaud. “We already have more than 100 people, but we need more.”

Find details of their job offers on their website.